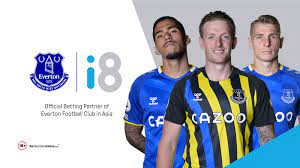 i8.BET will be designated the club’s exclusive Official Betting Partner in Asia, and will activate a marketing package that includes match day branding around Goodison Park as well as on the club’s online platform. I8.BET will also have access to Everton players for content and other marketing activity.

Everton have begun a harder push of their international commercial expansion, driven by relatively new owners, the expected move to their new Bramley Dock Stadium in 2024, and an investment in building their squad to break into the top six of the Premier League.

This season began well under new manager Rafael Benitez but has since tailed off as the team was struck by injuries to key players. Last night’s 4-1 home defeat to local rival Liverpool has further agitated a fanbase that was losing patience with the team and the club owners. Building significant regional sponsorship revenues requires a sustained period of top level performance that will grow the fanbase and attention on the club.

Darren Wang, CMO at i8.BET, said: “In line with our global tagline of ‘Choose The Best’, we are excited to exclusively partner with such an iconic Premier League team as Everton Football Club; a partnership that will see us working with the club on a number of exciting and innovative initiatives and promotions in key brand territories in support of our ongoing brand expansion and trust building efforts.”

He will be hoping there won’t too many performances like last night.