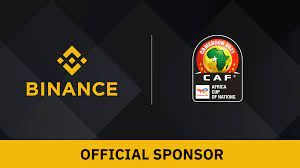 January 11 – The African confederation that has recently struggled to find hard cash to fund football on its continent has turned to cryptocurrency. Crypto exchange Binance has become another last-minute sponsor of the Africa Cup of Nations, which hosts Cameroon kicked off on Sunday with a 1-0 victory against Burkina Faso.

The partnership was only announced on Monday despite Binance being featured on the pitch-side led boards during the tournament’s curtain-raiser. It’s the first time Binance has sponsored a major international football tournament. The brand will feature for the tournament’s assist of the day, week and tournament awards.

CAF general secretary Véron Mosengo-Omba said that the confederation is “ready to embrace blockchain-based technology and its impact on the future of African football development”.

No value for the deal was disclosed or whether any payment for the sponsorship would be in crypto or real money. Binance has shirt sponsorship deals with both Italy’s Lazio and Portugal’s Porto. The company has also launched fan tokens at some leading clubs, including Brazil’s Santos.

Yi He, co-founder and chief marketing officer at Binance said: “With a population of 1.2 billion Africans and the prevalence of blockchain technology and its use cases, we believe the African continent could lead the future of the blockchain industry. We will continue to put in our efforts in pushing the mainstream adoption of crypto, so that more people can understand crypto, and understand Binance.”

Binance is the latest sponsor to headline at the Africa Cup of Nations. Previously, Tiktok, Umbro and 1XBET also became last-minute additions to CAF’s commercial partners.