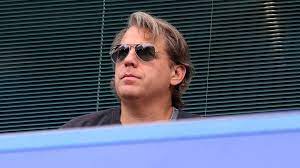 May 8 – Chelsea have confirmed that terms for the club’s sale have been agreed with the consortium led by LA Dodgers part-owner Todd Boehly, financed by Clearlake Capital, and with US investor Mark Walter and Swiss businessman Hansjoerg Wyss along for the ride.

The deal, arranged by US investment advisors Raine Group, effectively puts an end to return to English ownership under Sir Jim Ratcliffe who was a late entrant to the bidding with his ‘keep the club British’ pitch.

With Ratcliffe having appeared on the scene the deal was concluded within a week. Four of the top six teams in the Premier League – Liverpool, Arsenal, Manchester United and now Chelsea – are under US majority ownership. Chelsea is the only club to be majority owned by an investment fund.

No breakdown of the shareholder splits have been revealed though there will be pressure to see how they work out in what is supposed to be a new era of fan-consultation-requested and subsequent government-demanded transparency in the ownership of football clubs.

The Boehly group is paying £2.5 billion to buy the club and has committed a further £1.75 billion to invest “in Stamford Bridge, the Academy, the Women’s Team and Kingsmeadow and continued funding for the Chelsea Foundation,” the club said in a statement on Saturday.

The full amount will be placed in a “frozen” UK bank account “with the intention to donate 100% to charitable causes as confirmed by Roman Abramovich. UK Government approval will be required for the proceeds to be transferred from the frozen UK bank account,” continued the club statement.

The ‘charitable causes’ are understood to be relief for victims of the Ukraine war – the reason Ambramovich was stripped of his UK assets and the club in the first place. The club seemingly couldn’t quite bring itself to mention the Ukraine part of the deal specifically.

It had been rumoured that Abramovich had changed tack and was attempting to call in his £1.6 billion of outstanding loans to the club, however, he quickly denied that was the case with deal hours after his denial being confirmed.

The takeover is still subject to regulatory approval and presumably the passing of the fit and proper persons test conducted by the Premier League – though those are not difficult tests to pass. A stronger test might be a commitment to the future of the club within the accepted structures of the European sports model.

US sports investors are generally all about the money and in Clearlake Capital, Chelsea has a majority shareholder that is only about money.

Chelsea said the deal is expected to complete late this month.

Chelsea are currently operating under a restrictive licence from the government. To complete the takeover they will have to have the terms of that license changed to enable a return to full operations. The club has been unable to offer new contracts to a number of players.

Boehly was on hand at Stamford Bridge on Saturday to see his new team continue their blip in form as they shipped a two-goal lead in the final minutes to draw 2-2 with Wolves. On Sunday Chelsea’s Women secured the Super League title. Boehly wasn’t present.