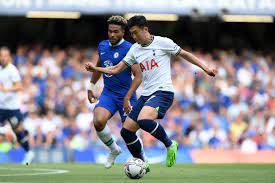 August 19 – Not for the first time, Chelsea fans are in the headlines for shaming their club over allegations of racism.

Tottenham Hotspur’s South Korean forward Heung-Min Son was allegedly racially abused by a member of the crowd during the fiery 2-2 draw at Stamford Bridge last Sunday.

Son played 79 minutes of the match which ended in chaos as both coaches received red cards following a confrontation after the final whistle.

Chelsea have previously handed out life bans to supporters found guilty of racial abuse and the back of every seat at Stamford Bridge now has instructions on how to report incidents of abuse, either by text or by barcode on a smartphone.

“We are investigating this incident and, if identified, this individual will face the strongest action from the club,” said a Chelsea statement

“Chelsea Football Club finds any form of discriminatory behaviour totally abhorrent. It has no place at Chelsea or in any of our communities.

“Chelsea FC has consistently made its zero tolerance position on discriminatory behaviour very clear, yet there are still idiots like this that attach themselves to this club as so-called ‘fans’, which shames Chelsea FC, our coaches, players, staff and our true supporters.”