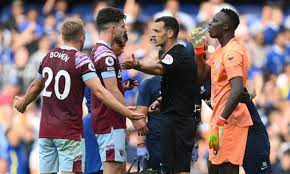 September 5 – The Premier League continued its love-hate relationship with VAR over the weekend with two controversial and game-changing decisions following VAR intervention.

The two decision that caused consternation across the game in England saw goals ruled out at Chelsea and Newcastle.

A last-minute equaliser goal by West Ham saw Chelsea take all three points and keep them near the top of the table, while Newcastle were denied a vital three points that saw them drift away from the leading clubs.

Such was the furore over the decision, that referees’ body PGMOL (Professional Game Match Officials Limited) said it will fully co-operate with the Premier League’s request to review the decisions together as part of an ongoing assessment of weekly performances.

West Ham’s  90th-minute Maxwel Cornet equaliser was ruled out after Jarrod Bowen was judged to have fouled Chelsea keeper Edouard Mendy. Mendy fumbled and lost the ball and then fell as if injured by Bowen.

West Ham manager David Moyes called the decision “scandalous” going on to say that “the sad thing is this is the level of the weak refereeing at the moment.”

In the Newcastle game Crystal Palace defender Tyrick Mitchell turned the ball into his own net only for referee Michael Salisbury ruled it out for a foul by Newcastle player Joe Willock on goalkeeper Vicente Guaita, though it was clear the midfielder had been pushed by Mitchell in the first instance.

Controversy was not just confined to VAR’s interventions, it also raged around VAR’s lack of intervention.

Leeds manager Jesse Marsch was sent off for his reaction to two penalty decisions that were not given in a defeat by Brentford.

Liverpool’s Virgil van Dyke was lucky to stay on the pitch in the Merseyside derby against Everton after a late tackle on Amadou Onana.