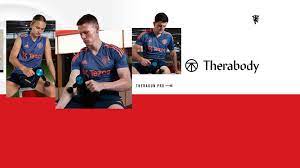 September 7 – Manchester United have extended their relationship with wellness technology company, Therabody into a  global partnership.

The multi-year agreement with Therabody will expand the club’s use of Therabody products as part the training and recovery regimes of both the men’s and women’s teams, as well as showcase the brand to a global audience.

Therabody is pioneering the future of recovery and self-care through its ecosystem of solutions that help people feel better, move better, and live healthier lives. Its products are backed by science and bring previously inaccessible technology to everybody.

Therabody’s devices help United’s players meet the physical demands of a sport that involves the use of every muscle in the body, from your brain to your feet; research shows that players cover anywhere from 8,000 to 10,000 metres or more in a 90-minute match. Matches are long and fast-paced, requiring constant running and short sprints during active play. Because of this type of activity, proper warmup and cool down is imperative to attaining full recovery and preventing injury.

Manchester United will use the company’s Theraguns (handheld massage therapy devices) in their training facilities to prevent injury during practices and matches, and speed up recovery. The teams will also have access to Therabody’s pneumatic compressions device range, including RecoveryAir’s JetBoots, in the training rooms and on all away trips.

As part of the global partnership, players, and training staff will participate in education sessions with performance and wellness experts from Therabody University, the company’s educational division. Working with United’s medical team.

Victoria Timpson, Manchester United’s CEO of Alliances and Partnerships, said: “The partnership also aims to give United’s global audience access to the same in-depth performance education so they too can easily take control of their training and recovery in the same way as their favourite players, through the use of Therabody products.”

As part of the global partnership, players, and training staff will participate in education sessions with performance and wellness experts from Therabody University, the US company’s educational division. Therabody experts will develop specific protocols to give players the knowledge to optimise their use of Therabody’s devices.

Dr. Jason Wersland, Founder and Chief Wellness Officer of Therabody, said: “Educating their players, staff, and passionate global fanbase on the importance of ownership in self-care is paramount to Therabody’s mission.”