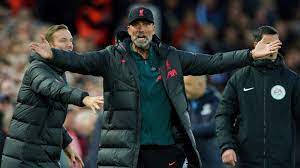 October 19 – Liverpool manager Jurgen Klopp has been charged by the English Football Association following his sending-off during his side’s 1-0 win against champions Manchester City at the weekend.

Klopp was dismissed after berating a referee’s assistant when a foul was not given for a challenge on Mohamed Salah.

Klopp apologised for his reaction in his post-match comments.

“Something snapped in that situation, I’m not proud of that. I deserved a red card, and the way I looked in this moment is not right,” the German admitted.

Klopp has also rejected claims his comments on the financial power of Middle East-owned clubs were xenophobic.

Klopp was accused – with pre‑match comments about Liverpool being unable to compete with three clubs who can “do what they want” financially – of inflaming tensions around the already high profile City fixture – a game in which coins were thrown at City manager Pep Guardiola while City fans chanted abusive songs in relation to the Hillsborough and Heysel disasters.

“I know myself. And you cannot hit me with something which is miles away from my personality,” Klopp declared.

“It is not the first time I am misunderstood. I know what I thought when I said it. If someone misunderstands that, or wants to misunderstand that, I cannot change that.”