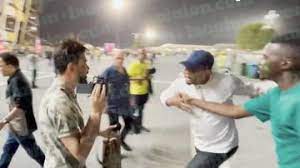 December 7 – Samuel Eto’o has apologised for a “violent altercation” when in a bizarre and distasteful incident he kicked a fan outside a World Cup stadium.

“After the Brazil-South Korea match, I had a violent altercation with a person who was probably an Algerian supporter.” Eto’o said in a statement on Twitter.

“I would like to apologise for losing my temper and reacting in a way that does not match my personality. I apologise to the public for this unfortunate incident.”

“Since the Cameroon-Algeria match on 29 March in Blida, I have been the target of insults and allegations of cheating without any evidence,” Eto’o added.

“During this World Cup, Cameroonian fans have been harassed and pestered by Algerians on the same subject. I would like to mention that the scenario of Algeria’s defeat was cruel, but perfectly in line with the rules and ethics of our sport.”

Footage had emerged that shows the current Cameroon FA chief and former footballer hitting a man with his knee following a heated exchange and bystanders trying to restrain Eto’o.

The man has been filming Eto’o asking a question, but as he moved away Eto’o broke free and hot the man with his knee. The incident took place outside Stadium 974 after Brazil’s 4-1 victory over South Korea.

A decorated former player, Eto’o is also a FIFA legend and an official ambassador for the 2022 World Cup.