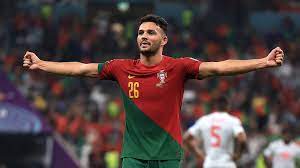 December 7 – It was a massive gamble and fortunately for Portuguese coach Fernando Santos it paid off – and then some.

Santos’ bold decision to axe his captain Cristiano Ronaldo in the last 16 of the World Cup against Switzerland on Tuesday sent shockwaves through the tournament – only for his little-known replacement to become an overnight sensation with a stunning and unexpected hat-trick in his first international start.

If not many outside Portugal knew 21-year-old Benfica striker Goncalo Ramos before the scintillating 6-1 thrashing of Switzerland, they certainly do now. Ramos, who has 21 goals this season for his club, led the demolition as his country swept into the quarterfinals.

By contrast, there must now be serious doubts about the future at international level of 37-year-old Ronaldo, a five-time Ballon D’Or winner. Following his exit from Manchester United and likely move to Saudi Arabia, there are legitimate questions about whether his stellar career on football’s biggest stages is winding down for good.

At the end of the Swiss match, tv pictures showed Ronaldo congratulating Ramos and then walking towards the Portuguese contingent of fans before walking off the pitch alone

Santos insisted that the decision was tactical and not disciplinary after widespread reports suggested he was upset by Ronaldo’s poor attitude after he was substituted in the 2-1 defeat to South Korea in the final game of the group stage.

“I think those issues have been solved,” Santos insisted. “I repeat myself: This is something which is finished, solved. I have a very close relationship with Ronaldo. I have known him since he was 19.”

Yet he refused to offer the ageing Ronaldo a clear route back into the starting line-up against Morocco in the last eight.

“That is still something that has to be defined. All the players who are with me can be used and if they are not in the starting XI they can play later.

“We wanted a team that played with a lot of fluidity. Cristiano is more fixed, he stays in a more determined role towards the box. Gonçalo has different characteristics: he is very dynamic and that’s what he ended up showing us.”