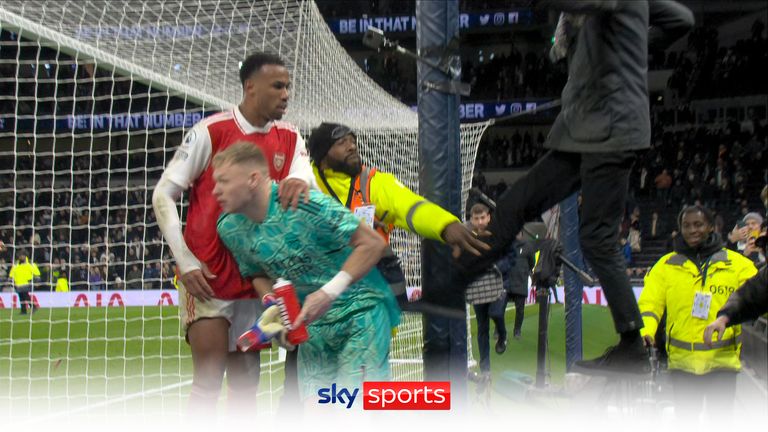 January 16 – Tottenham Hotspur say they will ban for life a spectator who climbed on to an advertising hoarding and appeared to kick Arsenal and England goalkeeper Aaron Ramsdale after the visitors won 2-0 in the Premier League on Sunday to strengthen their grip on the title race.

The incident took place moments after the final whistle at Tottenham Hotspur Stadium as Ramsdale went to pick up his water bottle from behind one of the goals.

The spectator leaped over the railing, mounted the hoarding and aimed a kick at Ramsdale’s back before getting back into the crowd.

Ramsdale didn’t seem hurt and was dragged away from the area by teammates before celebrating in front of Arsenal’s supporters at the other end of the stadium.

Interviewed after the game, Ramsdale, man-of-the-match with several fine saves, said he received “a little punch in the back. It’s a shame because it’s only a game of football at the end of the day. Thankfully nothing actually happened too drastically.”

Tottenham said it had already reviewed camera footage to identify the spectator and would take the “strongest possible action,” including an immediate stadium ban.