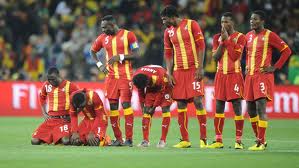 African football, with its wealth and depth of talent, undoubtedly has the skill to conquer the game’s steep summit – the World Cup – and end Europe and South America’s iron-grip domination of the sport.

It has come agonisingly close to crossing the Rubicon on so many occasions: Roger Milla’s Cameroon in 1990, when they ought to have beaten England in the Italia ’90 quarter-final, as well as Nigeria’s Super Eagles at USA ’94, 120 seconds away from bundling Arrigo Sacchi’s Italy, the losing finalist, out of the tournament.

And, of course, who can forget the moment of disappointment at the 2010 World Cup finals when I, and most of the 84,017 fans, on a bitterly cold July 2nd winter’s night in Johannesburg’s Soccer City stadium, saw Ghana’s Black Stars (pictured) miss out on, by whiskers, a historic place in the semi-final, after a painful loss to Uruguay?

Or how DR Congo’s TP Mazembe became the first club, outside Europe and South America, to reach the final of the FIFA World Club Championship in 2010, losing gallantly to Inter Milan in the final?

But, as Muhammad Ali, the three-time heavyweight boxing champion – and arguably the most charismatic and gifted sportsman of the modern age, who transcends sport – succinctly points out, skill, without the will, is an insufficient tool for conquering the steep pinnacle of sporting achievement.

Yes, the will is needed, to fashion a visionary plan for the development of African football. An iron will is required, to execute it with diligence and discipline – without which the abundant talent in Africa’s various clubs, its national leagues and national teams cannot thrive and realise its potential.

“African football, certainly, does not lack the talent to win, but its administrators must learn that they must plan,” FIFA president Sepp Blatter told me, during our frank discussion on the state of the African game.

“Other countries and continents take time to plan, and to strategise for success. African football must do the same.”

My twenty-five years of experience covering the African game, chronicling the ecstasy of victory and the bitter, unnecessary agony of defeat, has brought me to an unvarnished, undeniable truth – African football MUST manage its talent with the needed administrative support and business acumen, if it is to become an effective competitor at the global level.

Those two ingredients are desperately missing at the moment.

“When we, as a continent, were hosting the 2010 World Cup, many people in Africa were conned into receiving a virtual trophy,” says the former Cameroon and Marseille goalkeeper, Joseph-Antoine Bell.

“They were telling us that we have a chance to win the trophy because the continent was hosting it. These white people were just deceiving Africans and we accepted that… We saw what eventually happened.”

“If you want something, you have to work for it.” The 2014 World Cup finals in Brazil will certainly be an eloquent testimony to that.

Osasu Obayiuwana, a lawyer and BBC broadcaster, as well as the Associate Editor of NewAfrican magazine, is one of African football’s leading journalists, whose regular commentary on the state of the continental game can also be read at footballisafrica.com