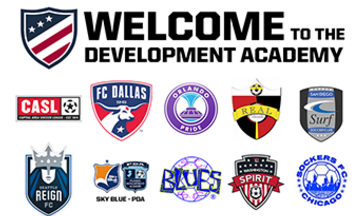 July 5 – The US Soccer Federation has officially announced a new 25-club Girls’ Development Academy that will start matches in the Autumn of 2017. The academy structure is “an initiative designed to accelerate the development of world-class female players” in the World Champion nation.

“Launching a Girls’ Development Academy is part of an unprecedented commitment to elevating the women’s game,” said U.S. Soccer Women’s Technical Director April Heinrichs. “The Development Academy program will offer clubs support and education to positively impact the development of players and coaches throughout the country.”

U.S. Soccer has said the academy programme will work alongside the NWSL “ to support player development and the long-term growth of professional soccer”.

Initially announced in February, US Soccer has since then been through a process of selecting the first 25 clubs to form the Academy structure.

US Soccer says the clubs selected “have a total of 119 staff and coaches that hold a U.S. Soccer A or B Coaching License, and includes 91 coaches who are employed on a fulltime basis.  To date, these clubs have produced 307 players for U.S. Soccer’s National Teams (youth and senior) as well as 84 professional soccer players. In addition, this group will be providing 276 full scholarships with a total of $1.49 million of scholarship funds being contributed.”

The scholarship money is significant as often players are unable to participate in club set-ups because of the often high cost of club football in the US. However, the higher costs does guarantee better coaching and facilities independent of the ‘parent’ coaching model that too frequently leads to issues and conflict.

“We all know how important it is to create the correct environment and expectations for elite player development, something that was highlighted for me during my time as Development Director for our youth Women’s National Teams,” said U.S. Women’s National Team head coach Jill Ellis. “The Development Academy is an important step forward to continue the growth of the women’s game in the United States, and to create the best pathway for players to reach their full potential.”

The US already had the world leading development youth league in the six-year-old Elite Clubs National League (ECNL) which has provided more than 80% of US women and girls national team members from its 76 member clubs, and had been the backbone of elite youth player development. Many of those clubs will become Academy clubs, creating some uncertainty and a competition for players in a number of areas. US Soccer has said that Academy players may only play for the Academy team and not in High School teams or other club sides.

The Academy system is expected to dovetail with the 10-team National Womens Soccer League (NWSL), though many of those club franchises do not have a youth section or development. One of the leading clubs, Washington Spirit, has overcome this by partnering with four local clubs – Arlington Soccer Association, Braddock Road Youth Club, Loudoun Soccer, and Southwestern Youth Association – to become one of the first 25 member clubs.