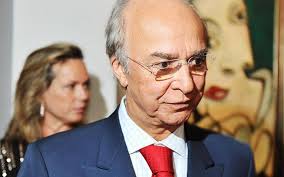 December 5 – A prominent Brazilian businessman testified on Monday that he participated in a bribery scheme to buy the influence of key FIFA officials in order to win commercial rights to major tournaments, a decision he later regretted.

“I made a mistake,” Jose Hawilla (pictured), owner and founder of sports marketing agency Traffic,  said at the much-publicised trial of three former South American powerbrokers. “I committed an error, and I regret it very much.”

Hawilla is the latest figure to take the witness in the trial of Angel Napout, Manuel Burga and Jose Maria Marin. Hawilla is one of the main players – if not the key player – in the South American corruption scandal that rapidly travelled into central and north America and caught more than 40 football officials in its web of bribery and money laundering around broadcast and marketing rights.

Hawilla has already pleaded guilty to corruption charges and forfeited $151 million in a plea bargain deal that saw him provide crucial evidence that widened the US investigation. His own sentencing is scheduled for April 23.

Testifying in Portuguese through an interpreter, the 74-year-old described how his marketing business and two other firms joined forces to pay a $10 million bribe to Jeffrey Webb, then a FIFA vice president and president of CONCACAF and the biggest fish to be snared so far in the scandal, in order to help secure the rights for the Copa America in 2016. Webb, once touted as a FIFA president, has pleaded guilty to racketeering charges and is awaiting sentencing currently schedule for July next year.

The New York jury also heard for the first time recordings made by Hawilla after he was arrested in 2013 and agreed to cooperate with the FBI by wearing a wire. One tape captured a meeting with Hugo and Mariano Jinkis, the father and son team who ran the Argentina-based firm Full Play, where they discussed bribing presidents of various national federations.

Hugo and Mariano Jinkis are also among the more than 40 individuals and entities charged in the corruption probe. Last year, an Argentine judge denied a US extradition request for the pair, citing the fact that they were already being prosecuted there.