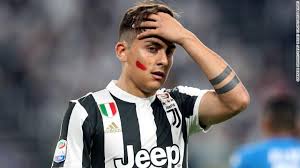 April 24 – When Juventus and Napoli met in an all-important fixture at the top of Serie A last weekend, television viewers worldwide may have wondered why both sets of players had red stripes on their faces.

The stripes were in fact red lipstick as part of a nationwide initiative to raise awareness of domestic violence against women.

Napoli captain Marek Hamsik and AC Milan goalkeeper Marco Storari were among those posting images on social media alongside their wives and girlfriends as part of the #unrossoallaviolenza (a red card against violence) campaign.

The ‘Give violence against women the red card’ initiative was organised by players’ associations together with Italian humanitarian organisation WeWorld Onlus.