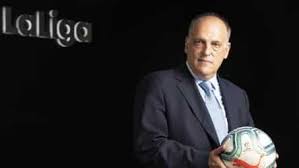 November 16 – La Liga president Javier Tebas has again spoken out of the damage a ban on betting sponsorships will have on club and their ability to trade solvently, especially with the covid crisis preventing fans in stadia for what is likely to be until at least the end of the current season.

Tebas repeated his call to Spain’s coalition government to suspend the ban on betting sponsorships, instead calling for tougher gambling regulation of the industry and football sponsorship.

The effect of this funding shortfall will be to damage the international competitiveness of LaLiga’s teams and in the big money European club competitions in particular.

“We are going to have a talent crisis as the Government does not know how to regulate this industry,” Tebas said. “The issue of betting, instead of prohibiting it, should have been regulated because that is €90 million that we are short on.

“The Premier League does not have that and now, national and foreign footballers are going to have offers from Italian teams, the clubs are going to cost half of what they cost us.”

LaLiga has told Spanish clubs that they have no alternative but to reduce their wage bills to get through the crisis. Barcelona and Real Madrid players are already locked in negotiation with clubs over wage reductions. Valencia were also highlighted as a concern.

“We’re working to fix it,” he said. “Valencia is no longer in the Champions League, for example. They’ve been criticised for selling players but they have to, and Barcelona have to lower their wage bill to finish the season. They have no other option.”