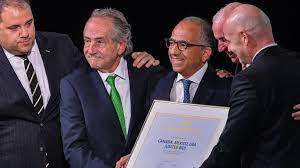 July 7 – Montreal has withdrawn its bid to be a host city of the 2026 World Cup, leaving Edmonton and Toronto as the only two Canadian applicants.

The reason for Montreal pulling out was reportedly the withdrawal of financial backing from the local government in Quebec, in large part due to the financial impact of the Covid-19 pandemic going forward. Montreal’s Olympic Stadium was the city’s proposed venue.

The decision to withdraw was not entirely unexpected, according to Canadian sources. Pressure has been building in the US (where there are 17 cities bidding for 10 host slots) for one or more of the Canadian host slots – it is not definite that Canada would have three host berths – to be moved south of the border.

“FIFA has been informed by Canada Soccer of the decision taken by the City of Montreal to withdraw from the venue selection process for the FIFA World Cup 2026,” said Soccer Canada in a statement. “FIFA would like to thank Montreal for its participation and all local stakeholders involved for their efforts.”

Sixty games are to be played in the US, including all matches from the quarter-finals onwards. Canada and Mexico are to host 10 games each.

FIFA said Tuesday it plans to conduct venue visits from September to November and finalise selections during the first six months of 2022.

Montreal is the second city in Canada to withdraw in in recent months, following in the footsteps of Vancouver earlier this year. All hopes for hosting in Canada now rest with Edmonton and Toronto before the group of 16 North American venues are confirmed by FIFA.