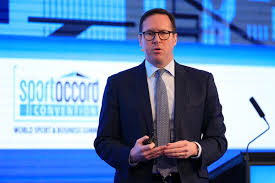 March 26 – City Football Group (CFG), owners of Premier League Manchester City and New York City FC in the MLS, has again indicated that further club acquisitions are likely and that China will likely be the next market.

CFG has been investing in developing its Manchester City clubs brand in China and with a 13% ownership position in the group by China Media Capital, has for some time been expected to buy a club in the country.

Glick pointed to the improving commercial strength of the Chinese Super League and the government commitment to develop football in the county as being motivating factors to tacking the next step.

“There’s a huge push and an ambition from the government. The league is already a very healthy league with good attendances, good television viewership, so I think it’s a really exciting time right now for China and that’s one of the markets that we’re there on the ground, investing,” said Glick.

CFG as a holding company does not have to follow the financial fair play rules that bind some of its clubs and as such posted a £71 million loss from continuing operations for the 13 months to 30 June 2017. But how far the group is prepared to carry on losing money and investing in clubs and playing squads remains to be seen.

CFG’s losses have been mounting and the last reported results were almost double the £37 million losses reported the previous year.

At the centre of the group’s revenue generation is Manchester City who account for £473.4 million of the £514.3 million of revenue in the latest period. New York City contributed £30.1 million and Melbourne City £8.4 million.

This is not far off double the £37 million loss reported for the previous year. The group attributed this to its US club, New York City FC, and “newly formed service companies” continuing to build their business.

While the group holds investments in Melbourne City, Yokohama F Marinos of Japan, Club Atlético Torque in Uruguay and now Girona FC in Spain, as well as New York City, its figures are dominated by Manchester City.

Out of £514.3 million of revenue in the latest period, the English club generated £473.4 million, with New York City contributing £30.1 million and Melbourne City £8.4 million.

An investment in buying or taking an ownership position in a Chinese club is not likely to reduce the group’s losses in the short term. But with the Chinese FA, under instruction from government, having enforced an economic reality on clubs after a period of huge player transfer inflation, mainly for overseas players, the conditions for investing are improved and the potential of China is very attractive with the right partner.