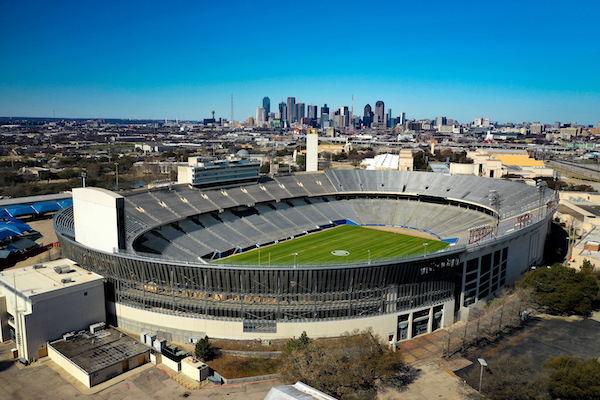 The Cotton Bowl Stadium in Dallas is a historic landmark having opened in 1930 as a 46,000-seat venue known as Fair Park Stadium. Today, the stadium has a capacity of more than 91,000-seats.

The stadium was the original home of the annual Cotton Bowl Classic from 1937 until 2009, when the game was moved to AT&T Stadium in Arlington in January 2010.

The stadium has also hosted world-class entertainment. In 1956, a 21-year-old Elvis Presley attracted 27,000 fans to the stadium, at that time the largest crowd to attend an outdoor concert in Texas. In the late 1970s, the band Aerosmith recorded their first live concert in Cotton Bowl Stadium. During the 1980s, the Texxas Jam concert series in Cotton Bowl Stadium featured Bruce Springsteen, Heart, Journey, Van Halen, Santana, and the Eagles, among others.