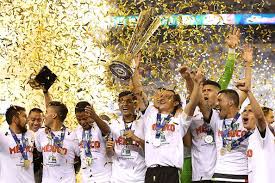 July 9 – Saturday night will see reigning champions Mexico open the 2021 Gold Cup and the defence of their title in front of more than 60,000 fans at the AT&T Stadium in Arlington, Texas.

It will be the start of a hectic three week journey which for the Mexicans will be deemed to be a failure if they don’t end up at the final on August 1 in Las Vegas. Winning the Gold Cup in the US is always particularly sweet for El Tricolor and their US-based fans.

If the finalists are the US then even better as Mexico are desperate for revenge after the extra loss in the inaugural Nations League final in June in Denver.

Since then the Mexicans have drawn with Honduras 0-0, beaten Panama 3-0 and thumped one of Africa’s best, Nigeria, 4-0. They look to be coming into form at the right time.

Their first opposition will be Prelims winner Trinidad and Tobago who scraped through on penalties last weekend against a little-known French Guiana side. It will be a tough assignment for a Trinidad team whose disastrous federation management and decision making has impacted the team on the pitch.

For Trinidad and Tobago just qualifying for the Gold Cup stages is a step along the path to returning as a competitive nation at the region’s top table of football competition – a reflection of how far they had fallen in such a short space of time. It wasn’t long ago that Trinidad and Tobago beat the US to keep them out of the 2018 Russia World Cup.

But this isn’t the same team that played the US, and Mexico are certainly a more driven team than that US team showed on that famous night in Trinidad.

Mexico are coming to the Gold Cup with all their big guns. Napoli striker Hirving Lozano will lead their attack. He has 14 goals in 47 matches with Mexico an in his last match in Arlington scored both goals in the 2-1 friendly win over Iceland.

There is plenty of other attacking talent to trouble Trinidad and Tobago. Rogelio Funes Mori  made his Mexico debut against Nigeria and scored just four minutes into the match. While winger Uriel Antuna, a breakout player for Mexico at the 2019 Gold Cup with four goals, will be looking to make his mark again in 2021.

Trinidad and Tobago are proving that they are a team prepared to fight – a quality that looked to have all-but disappeared under coach Terry Fenwick’s regime that was as disastrous as the administrators who appointed him and were then replaced by a FIFA Normalisation Committee.

New coach and Trinidad and Tobago’s most capped player Angus Eve was drafted in at the last minute and immediately instilled a new belief and resilience. He was not helped by injuries to key players but stand-out performances from midfielder Kevin Molino, who scored two goals in the Prelims, plus Reon Moore, who scored two goals in the First Round win versus Montserrat, pulled the team through any wobbly moments.

The biggest test though is likely to be for goalkeeper Nicklas Frenderup who will need to keep his backline focussed as well as being on top of his own game. Skipper Khaleem Hyland, who came off injured against French Guiana, will be a key figure in that defensive line-up. Frenderup goes into the tie with the confidence of having made the decisive save in Trinidad and Tobago’s 8-7 penalty shootout win in that game. He will have a lot more work to do in Texas.