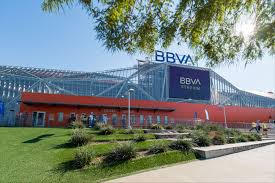 July 15 – Houston’s BBVA stadium will host the first sell out crowd of the Concacaf Gold Cup 2021 this Saturday (July 17) for the Group D doubleheader of Honduras vs Panama and Grenada vs Qatar.

It is the second date to officially sell out during the 2021 edition of the Concacaf Gold Cup, joining Allegiant Stadium in Las Vegas for the Final, which sold out in only 90 minutes – the fastest sellout in tournament history.

Houston hosted the first night of Gold Cup 2021 football yesterday. And it was a stormy evening. First start times were delayed an hour with the dangerous weather in the area preventing kick-off, and then Qatar and Panama served up a football feast with a second half cascade of six goals.

This is group is living up to its group of death tag with Saturday’s game being a must-win for Panama if they want to stay in the hunt for the knock out rounds. A win for Honduras -who beat Grenada last night – will guarantee their progression. A draw would leave all options open if Qatar beat Grenada, which looks likely.

Saturday’s game will also see the first reintroduction of the Gold Cup Fan Zone presented by Toyota outside the ground, and organisers are encouraging spectators to turn up early.

Fans will have the opportunity to take apicture with the Gold Cup trophy. After the performances last night it is not beyond belief that Honduras, Panama or Qatar could end up taking it home on August 1.