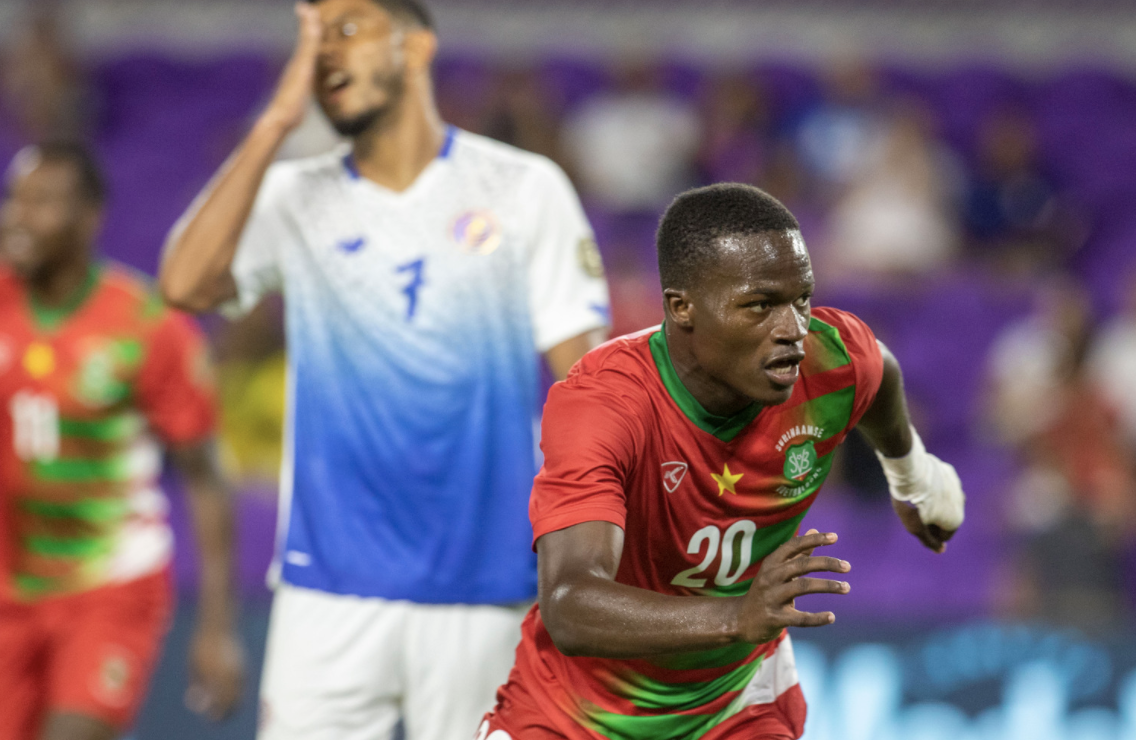 July 17 – Costa Rica rode their luck in a pulsating second half of their second Group C qualifying game against Suriname to qualify for the knock out rounds.

Suriname proved that they will be competitive in the upcoming World Cup qualifiers and with a little more composure in front of goal and more accuracy with their final attacking passes they could easily have won this game.

The first half gave no indication of the drama and spectacle this match was to deliver in the second. Neither side were able to dominate and there were few goal chances to get excited about. The best chance fell to Suriname’s Sheraldo Becker whose shot across goal was well saved by Esteban Alvarado in Costa Rica’s goal.

There is an almost accepted top order in Concacaf and for Suriname to win they would have to make a dent in it. If Mexico and the USA are the traditional kings of the castle, Costa Rica are the generally accepted next in line to the throne. As the game wore on and Suriname grew in confidence it became clear that this could be a serious threat to the monarchy.

Seven minutes into the second half Suriname’s 21 year old goal scoring machine Gleofilo Vjilter (pictured) put them a goal up with his 12thgoal in 10 games for his country. Receiving the ball in front of goal 4m out he turned sharply to score left footed into the left corner. It was a classic striker’s goal.

Before the match Concacaf president Victor Montagliani presented Vjilter with the Concacaf Nations League Top Scorer award for his 10 goals in the competition that helped Suriname qualify for the Gold Cup. If Costa Rica should hadn’t been paying attention then, they were now.

Subs were sent from the bench to vigorously warm-up and Costa Rican legend Bryan Ruiz, rested from the starting line-up but so often his country’s saviour, was seen making his way towards the fray like the battle scarred warrior he is.

It was enough to light a fire under the Costa Ricans on the pitch. In the 58thminute Joel Campbell met a cross from Ronald Mattarita to equalise. Suriname heads dropped for a few seconds and Costa Rica were in again. Campbell, with a ball threaded through from midfield fired his shot into Suriname keeper Warner Hahn. The ball came out to another Costa Rican old stager Celso Borges who pushed it into the net for a 2-1 lead.

It should have been game over but Suriname, led by their admirable captain Ryan Donk, drove themselves forward. On 62 minutes substitute Nigel Hasselbaink barrelled into to the box on the left hand side only for his low cross to be agonisingly put wide.

On 65 minutes Francisco Calvo fouled Ivenzo Comvalius on the right hand edge of the box, Diego Biseswar, named after Diego Maradona, and who had pushed and prodded the Suriname midfield the whole game saw his free kick float over the top of the Costa Rican defense.

On 81 minutes Borges again saved Costa Rica, this time with a defensive header from a dangerous Comvalius cross.

Costa Rica were pinned down. There was more drama on 86 minutes when a scuffle in the box before a corner was taken saw Donk go to the ground holding his face. When the referee eventually went to review the VAR screen he ruled Francisco Calvo had deliberately caught him in the face and sent him off. Because the offense was not in play there was no penalty awarded.

Costa Rica were clinging on but only just. In the second minute of added Comvalius, who had become more threatening as the night went on, hammered a shot into the post. So near but so far. For Suriname legends are being created, for Costa Rica legends are seeing them through.

Suriname will go home heroes after their last group game against Guadeloupe, knowing that they are keeping the right company.

Costa Rica will also go home heroes but before then they face Jamaica (without the suspended Celso and Kendall Watson who picked up a second yellow card) and then either the US or Canada in the quarter finals.