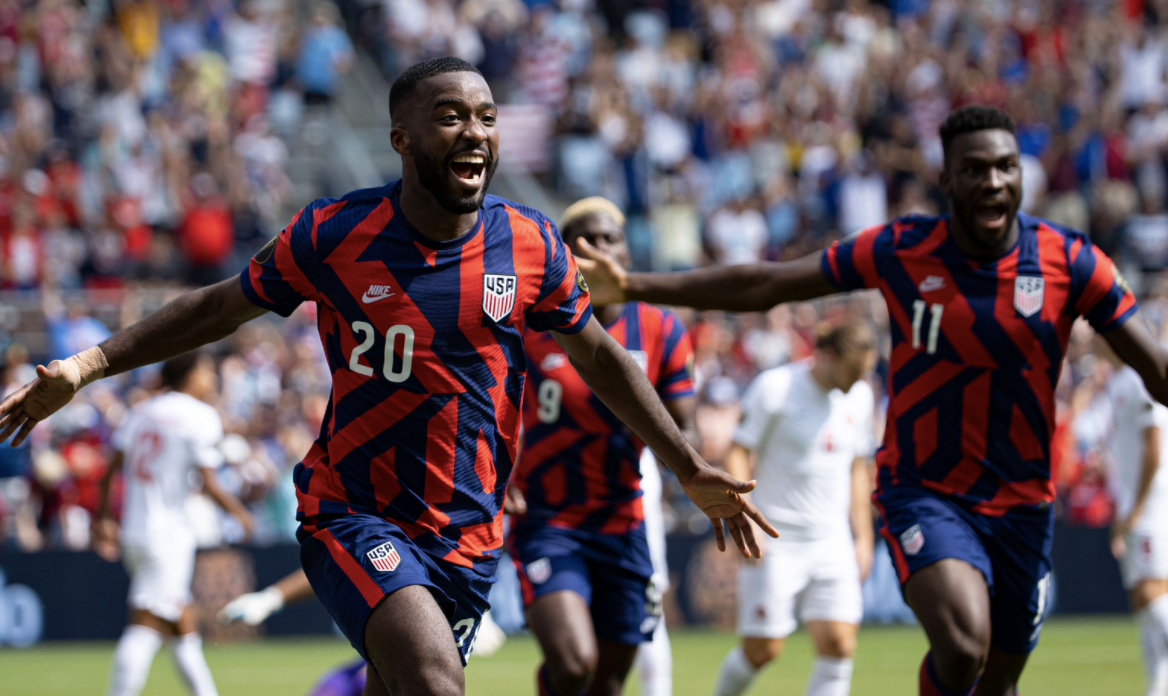 July 18 – The top of table clash in Group B table between the US and Canada at the Children’s Mercy Park in Kansas City exploded into action in front of a full house with a goal for the US within a minute. Shaq Moore lit the fuse for a frenetic end-to-end contest that saw the US take the top slot in the group.

Moore’s goal was the second fastest in Gold Cup history and was a statement of intent from a US team that has been pulled together from predominantly US based players in the MLS.

Shorn of their superstarlets Christian Pulisic, Gio Reyna and Weston McKennie, plus a host of other European based players sent back to their clubs for pre-season training, the US stuttered at the start of their Gold Cup campaign against Haiti, improved against Martinique in their second outing, and literally flew into this game against Canada.

Canada have not won the Gold Cup since 2000 but have built a solid squad, but they too have lost their two biggest stars – Bayern Munich’s Alphonse Davies Lille’s Jonathan David. Even so, there is a lot to like about this Canadian side who play a possession game that is very easy on the eye and opens up defences even though they struggle too often with the end product.

On the balance of the match they can consider themselves unlucky not to have come away with at least a point.

The opening US attack down the left saw Sebastian Lletget drive the ball across the face of the goal for a rapidly advancing Shaq Moore to tap in. Canadian coach John Herdman had not even had the time to put the cap back on his water bottle. It was another lesson hard-learned for the Canadian coach – the match starts when the whistle blows.

The Canadian’s were stunned into action and their reaction was swift.

In the 9thminute Richie Laryea attacking down the right was blocked in the box by Zimmerman – a bit penalty shout for sure but no VAR intervention, something that became a feature of this match.

For all their counter attack, the US were gradually losing the balance of good possession to the Canadians but although they pushed and probed around the US box they couldn’t find the final ball to open the US defence or the killer instinct to level the score.

If the US started the first half on fire, the Canadians did the second. Just 37 seconds US defender Pines squared the ball across his backline but only to the feet of Cyle Larin whose shot from the edge of the box was easily saved by Matt Turner – he should have done better.

Two minutes later Turner saved again, this time from Tajon Buchanan whose running from deep was causing the US real problems.

Next Richie Laryea was through on goal only to be clearly pushed off the ball – it was a nailed on penalty by anyone’s VAR. Incredibly the Mexican referee didn’t go to VAR but waved play on – ironic really considering the complaints of the Mexican federation over refereeing standards earlier in the week.

As the half wore on the Canadians built wave after wave of attack only too waste their effort with poor final balls, while the US were happy to suck up the pressure and counter at pace.

In the 79thminute the impressive Buchanan worked himself some space on the left and curled his shot just wide of the right hand space. If anyone deserved something for his effort he did.

With Canada remaining dominant, the US dropped eight men into their box for long periods in the final 15 minutes. In the 90thBuchanan again drove at the US defence and deep into their box but was shouldered off the ball. Probably not a penalty but even if it had been this ref would probably not have given it.

The US and Canada now move on to Glendale in Arizona where the US will play the winner loser of Costa Rica vs Jamaica and Canada the loser.