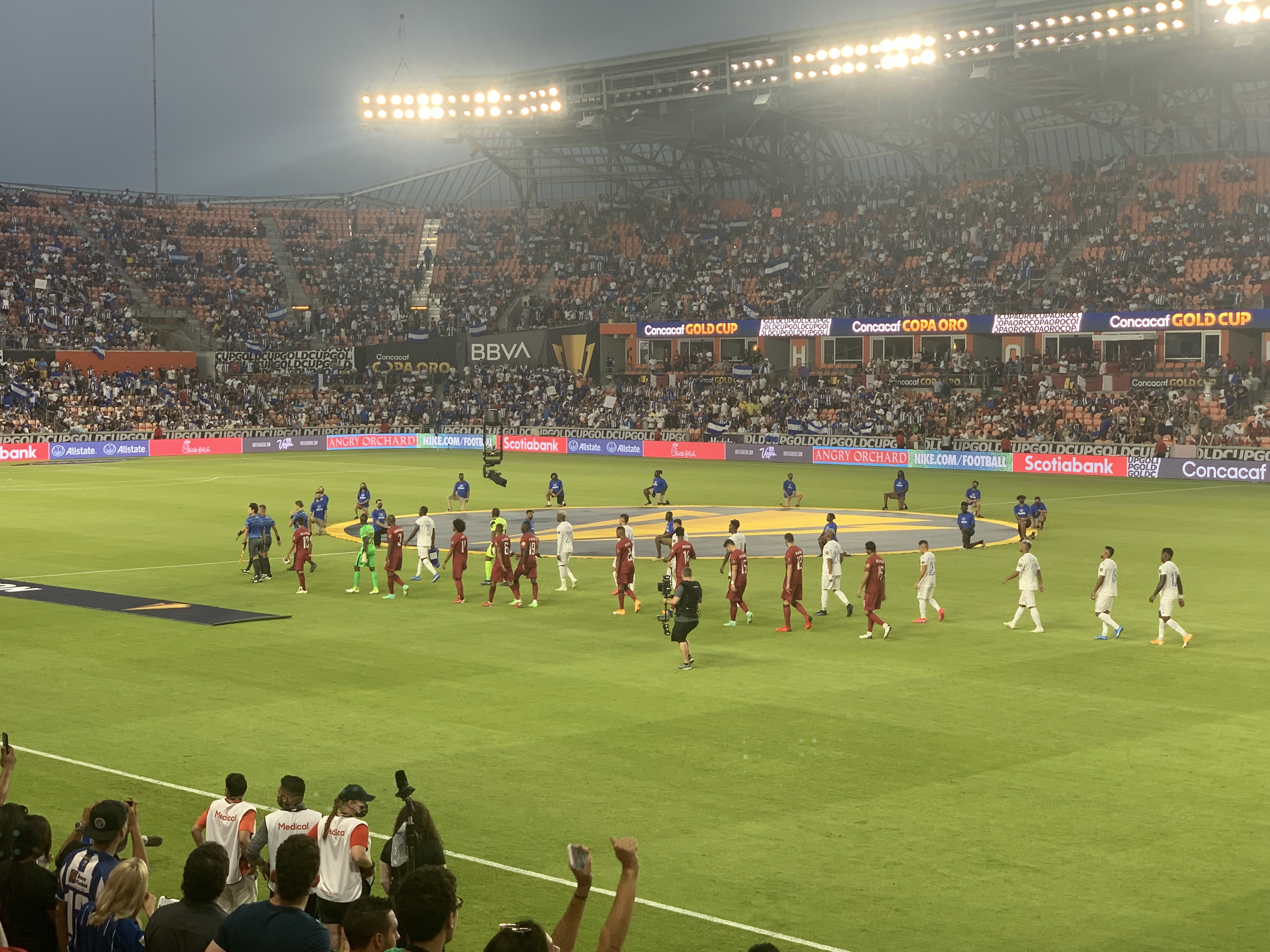 July 21 – Qatar went into this final Group D fixture at the BBVA Stadium in Houston needing a point to qualify and set up a quarter final match up with Mexico. A win would hand that assignment to Honduras. It was another night of pulsating football in a Gold Cup that has overflowed with drama on the pitch, and on occasion off it.

But it was Qatar’s imperious Akram Afif who continually opened the game up, roaming the pitch like the thoroughbred he has become. He could have opened the scoring on 4 minutes if the rest of his team were on his level. Having switched play left to right and steamed in to the left side unmarked the ball didn’t return to him.

Honduras were dangerous attacking down the flanks at pace and were urged goalward by another passionate Honduran crowd who made up the bulk of the 22,510 sell out in the BBVA Stadium. Felix Crisanto in particular caused multiple problems for Qatar defensive line on the right.

In the 14thminute Quioto received a ball over the top and headed directly for goal – offside but the Qatar back four were looking very breachable. Quioto, scorer of two goals against Panama last time out, pulled up clutching his hamstring and was later subbed for Jerry Bengtson, adding to Honduras’ injury problems. With the Honduran attacking threat reduced, Qatar took the game on.

Qatar’s best defence is attack and back up to the Honduras goal they went. A corner was headed wide while a free kick was gathered easily by Luis Lopez in the Honduran goal.

Qatar now had the Honduran goal under siege. On 20 minutes a ball across the face of the goal was fired over the top by Pedro Miguel.

In the 25thminute Honduras, now struggling to get out of their half and unable to put their normal possession game together, lost the ball in midfield. Qatar had their breakthrough. Homan Ahmad storming down the wing from left back hammered the ball into the left hand side roof of Lopez’s net. It was no more than expected.

On 37 minutes a Qatar breakaway saw Afif on the right side slide a ball into the path of Almoez Ali. His shot cannoned off a defenders legs for a corner – he should have done better..

Then came what should have been the killer blow for the Qataris. In the 40th minute they were awarded a penalty when Maynor Figueroa brought Abdelkarim Hassan down in the box. Afif stepped up but his shot was brilliantly saved by Lopez low to his right.

Honduran fans who had been quietened for a while suddenly returned to life.

Lopez again kept the Hondurans in the game with a save to the top right hand corner.

At half time the Hondurans went in 1-0 down but certainly not out.

Honduras in their last group game against Panama came back from a goal down at half time to win 2-1. They opened the second half against Qatar showing a similar belligerence. On 53 minutes they had a penalty claim turned down as they built their attacking platforms.

Qatar laboured and on 56 minutes Almoez, who can’t buy a goal at the moment, had a free header in the box on 6m which he headed into the ground. His frustration was for all to see as he blasted two more shots in quick succession into defenders when other options would have been more productive.

On the hour Honduras turned up the pressure another notch with the help of their fans. Another penalty claim was turned down and two shots narrowly missed within minute of each other. Qatar were holding on with everything they had.

With Honduras throwing everything at the Qatar goal, a three man breakaway deep into added time left Abdulaziz Hatem with an open goal to put the game beyond Honduras.

Qatar stepped over Honduras to top the group and send them to Arizona for a desert date with El Salvador.

Honduras were left to lick their wounds and patch up their lengthening list of wounded in action before they face Mexico.