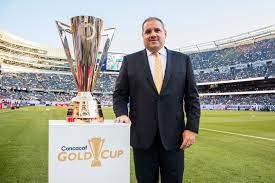 August 6 – With the Gold Cup having finished in dramatic style after extra time in Las Vegas last Sunday, Concacaf president Victor Montagliani has reflected positively on a tournament that delivered theatre on the pitch and a series of record breaking metrics off it.

For Montagliani the measure of the tournament is primarily “always about what happens on the pitch. We have seen a number of teams rise to the occasion like Canada, El Salvador and Panama. The big surprise was the champagne football Qatar played.

“For fans and participants it has been a great and unscripted drama. At one point we were looking at the reality of a Canada vs Qatar final.” Such was the impact that Qatar were making in the competition that US broadcaster Fox switched one of their games off their sports channel FS1 and on to the main network. Qatar eventually lost to the US, 1-0, but it was a game the US ended up clinging on to.

The 2021 edition of the Gold Cup saw an expanded entry to the competition with 12 teams playing off for the three remaining group places in Florida a week before the 16-team group stages began. It opened up the Gold Cup experience to more nations and built momentum into the main event.

Montagliani said that this was a big success and is likely to repeated going forward. Ultimately it is about creating competition opportunities and building more competitive teams within the region.

“What we have seen is that the top two teams in our region have been consistently challenged throughout the tournament,” said Montagliani.

“All the matches have been relevant and of value for all the teams. This Gold Cup has seen a substantially higher level of competitiveness. Perhaps the day may not be so far away for the US and Mexico to find that they are in trouble in qualifying for the World Cup.”

World Cup qualifying begins with the first international window in the first week of September. Eight teams are competing for four automatic slots and an inter-confederation play-off place.

The Gold Cup was also notable from other editions in that teams were seeded but drawn publicly for the first time, while the tournament structure allowed for the possibility for any team to play each other depending on results – effectively ending the guaranteed and somewhat rigged progression towards a Mexico vs US final.

“This edition has truly transformed the Gold Cup, it is a serious step forward and a process that began in properly in 2019,” said Montagliani.

A significant change – and another forced by covid protocols – was the decision to make groups centralised in metropolitan locations rather than moving the travelling circus city to city every four days. That was a back breaking schedule that took its toll on players and playing standards as the tournament wore on. This year the playing standards only improved as the rounds progressed with the US saving their best performance by far for the last 70 minutes of the competition.

The evolution of the Gold Cup in this edition has not just been in competition format and competitiveness. “If you compare the performance of the Gold Cup to the Euros and Copa America that also took place this summer, we are the only tournament that surpassed all our metrics from the previous edition. From fans in stadia, to eyeballs on broadcasts, to the level of commercial engagement – every metric was surpassed,” said Montagliani.

“It is possible that not all the football world has been taking notice but I can tell you that people in the wider world certainly are.”

The Gold Cup has set up the most eagerly anticipated World Cup qualifying the region has ever had. Mexico and the US will start as favourites for two of the four qualifying places but where in the past they might have considered qualification their basic right, this time round they looks like there will be no easy passage to Qatar.