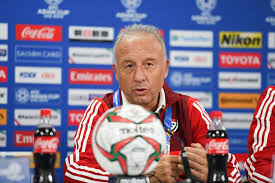 January 28 – Qatar’s captain Hassan Al Haydos has said his team have what it takes to reach the final of the 2019 Asian Cup as they face hosts the United Arab Emirates in yet another match that mirrors the geopolitical showdown in this fascinating tournament.

Felix Sanchez’s Qatar eliminated South Korea and Song Heung-min in the quarterfinals to achieve their best-ever result in the Asian Cup. The Qataris must now overcome the UAE iof they are to reach their first-ever final.

“Of course, we hope we will qualify for the final, but nothing will be easy,” said Al Haydos, who has more than 100 caps for Qatar and is playing in his third Asian Cup.  “We have been enjoying the tournament since the first minute, and we are all focused on trying to do our very best for the team. Our path so far has been very difficult with many obstacles, but we have progressed, and we are looking to improve even further against the UAE and reach the final.”

Qatar had been in goalscoring form in the group stages, but found it harder to break down defences in the knockout stages with the influence of both Akrim Afif and Ali Almoez meeting their match against defensively against the South Koreans. But that has done little to dampen the high spirits in the Qatar camp.

“I think everyone can see the [excellent] atmosphere among the players,” said Al Haydos. “Indeed, the 23 players plus all the technical staff are one big family and that is something which reflects positively on the pitch. We are confident and have prepared well for the match. We to be exactly where we are now, and we are looking forward to doing even better.”

Whichever way you look at it the match against hosts UAE will be another politically charged occasion with the UAE standing alongside Saudi Arabia in the blockade of Qatar. In the group stages the Qataris overcame Saudi Arabia in ‘Blockade Derby1’ which was a match peculiarly devoid of the bite on the pitch you would have expected given the circumstances.

Tomorrow it could be very different and the Qataris can expect a full and hostile crowd in Abu Dhabi after the local sports council snapped all unsold tickets to the game and started distributing them free of charge. UAE fans had failed to rally around their national team following some lacklustre performances in the group stages and last 16, but turned out in greater numbers to see a more feisty performance against champions Australia in the last eight.

“It is true to say that we had some difficulties in the first group stage games, as well as in the Round of 16,” said UAE coach Alberto Zaccheroni (pictured).  “But we are evolving and our performance in the last game [against Australia] was very good. I am therefore confident that we will be able to beat Qatar with a good performance. Qatar are a strong and organised team, and one that has yet to concede a goal. They have done well, not just here, but also in 2018. We must be highly focused in order to reach the final.”

In 2011 Zaccheroni led Japan to continental glory and he may face his old team on Friday in the final, but, while the Italian coach admits that is the target, he remains focused on the task in hand against Qatar.  “We are all aware of the importance of the game,” said Zaccheroni. “Each game for us is very important and we are approaching the match with Qatar as if it was a final. We are fully aware of our responsibilities, responsibilities which we are all willing to share so that we can beat Qatar in the semi-finals.”

“I want to achieve the goal that I set when I first came to the UAE, and that is to reach the final. That is also the aim of the players, the technical staff and everyone at the United Arab Emirates Football Association.”