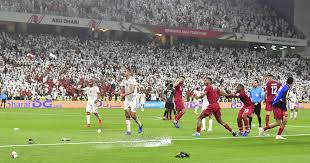 End of second half scenes of water bottles being thrown on to the pitch from all sections of the crowd, a UAE sending off, a Qatar goal in added time, players being pelted with sandals, and an increasingly frustrated UAE capacity crowd, all added to what was a feisty encounter on the pitch, packed with the needle you would expect with two nations who currently are not feeling the love for each other.

The Asian Football Confederation will wake up this morning with the headache of having to apply sanctions to the host nation for the unruly crowd behaviour but should take some consolation from the fact it could have been a whole lot worse if it hadn’t been for the bulk of the players and team staff on both side defusing a bomb that could have exploded nastily.

It was great drama, football and sports geo-politics on the edge. It might not have been the best game of football the world has ever seen but it was an example of what makes this such a great game anywhere in the world. This was a proper football encounter played with all the competitiveness that football fans expect. The geo-politics undoubtedly spiced the atmosphere but the football dominated, at least for the bulk of the first 80 minutes.

Unlike the sanitised group game between Qatar and Saudi Arabia, this was a full on, no holds barred, semi-final. Qatar dominated for long spells against a UAE team that never found any passing rhythm and who played too deep to seriously threaten Qatar’s goal. The imposing looking Ali Ahmed Mabkhout was too often left on his own too high up the pitch, often with only Ismail Al Hamadi to support him on the left. It proved as predictable as it was easy to defend against.

It had all started so well for the UAE with a near capacity crowd of 38,674 UAE baying fans (and one Korean lady dressed in a Qatar flag jumpsuit), booing their way through the Qatari national anthem and then belting out a rousing edition of their own anthem that needed no help from the PA system.

Qatar coach Felix Sanchez acknowledged the intimidating atmosphere saying “we were not feeling comfortable in the beginning”. But that didn’t last long as by the 10th minute Qatar were in their stride, dominating possession and forcing the UAE deeper and deeper.

On 22 minutes Qatar had their breakthrough, it was a lucky one. Akram Hassan Afif attacked at speed, feeding Boualem Khoukhi who shot right footed shot from the right side of the box to the bottom left corner. It was a shot UAE keeper Khalid Eisa Bilal had covered but somehow the ball went agonisingly under his hands. The crowd were stunned into silence at the error.

Qatar celebrated and then carried on where they left. On the half hour mark Afif went to take a corner but was met with a barrage of water bottles and stepped away. On 37 minutes after a period of sustained pressure, tournament top scorer Almoez Ali doubled Qatar’s lead and proved why European clubs, including Manchester United, are looking at him.

Afif was again the provider, feeding Almoez in the left hand side of the box who a hit right footed shot that curled from outside post into the bottom right corner of the goal. Any doubts that he could deliver on the big stage after the South Korea game were dispelled.

The second half saw UAE change their game up as they played with more urgency and pushed more men forward. Even so, Qatar always looked dangerous on the counterattack and despite the excellence and physicality of Mabkhout, were relatively unchallenged.

On 80 minutes, Qatar skipper Hasan Al Haydos seized on a pass from the effervescent Afif capitalising on a defensive error, to run though on goal and chip Bilal. As the Qatar team celebrated they was more sandal pelting from the UAE fans.

The UAE’s disintegration continued with Ismail Ahmed being handed a straight red card after elbowing Salem Al Hajri in the face. To complete the humiliation, and keep the projectiles coming, a sweeping Qatari move down the right saw Karim Boudiaf feed Ismaeil calmly slid the ball past the hapless UAE keeper.

UAE coach Alberto Zaccheroni, emphasising he took full responsibility for the performance, said: “We played better in the second half we did perform. I apologise to the fans and I admit the tactics that I used in the game did not play out. I tried to change but it was too late.”

An upbeat Qatari coach Felix Sanchez, referring to the missiles and the atmosphere, said: “It is not an easy situation, hopefully nothing happened. Only a few people behaved in a not proper way. The m ajority of people were very happy in the stadium (but very u.nhappy with the result). Players were very aware and play against a lot of pressure from the fans – is very normal. Host fans come to support their team.”

And in the UAE, once they have finished supporting, go home shoeless.