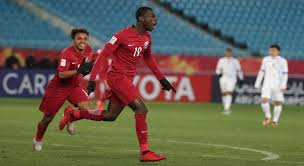 January 31 – The UAE Football Association has formally protested against the eligibility of two Qatari footballers who played in the Asian Cup semi-final on Tuesday.

The UAE lost the match 4-0 as a bad tempered home crowd threw bottles and sandals on to the pitch. The UAE FA are now calling for the semi-final result to be annulled and that they should take the place of Qatar in Friday’s final. Motaz Elshamy of Al-Ittihad newspaper reported that the UAE had lodged the complaint two hours after the match.

The UAE claim that Almoez Ali, a 22-year-old striker born in Sudan, and Bassam Al Rawi, a 21-year-old defender born in Baghdad, have not spent the previous five years in the country over the age of 18 to qualify for residency.

Almoez has been the breakout forward of the tournament and scored the second Qatari goal in the win over the UAE. He is top scorer in the Asian Cup with eight goals , equalling Ali Daei’s 23-year-old AFC Asian Cup record

Ali and Al Rawi both claim their mothers were born in Qatar, but the UAE FA claims it has documents proving Al Rawi’s mother was born in Baghdad and is expected to submit its evidence to the AFC Disciplinary Committee today.

The AFC acknowledged the protest had been received and that it was being reviewed.

“The Asian Football Confederation as received a protest from the United Arab Emirate FA regarding the eligibility of two Qatar players. The protest will now be reviewed in line with the AFC regulations.”

The situation is complicated and while the UAE say they have the paperwork to support their claim, the Qataris will need to be given time to provide their own documentation. It is not clear whether this can happen before the final is played.

Until then it is most likely that Almoez and Al Rawi will remain eligible on the basis of innocent until proven guilty. Al Rawi did not play against the UAE but is available for the final, assuming he and Qatar are allowed to continue.