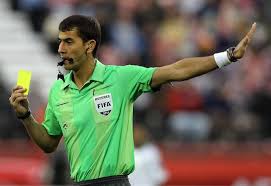 January 31 – Uzbek’s Ravshan Irmatov has officiated more matches in the history of the Asian Cup than any other referee, having taken charge of 13 matches in a record four Asian Cup final tournaments.

The AFC 2019 Asian Cup final between Qatar and Japan on Friday, will mark Ravshan’s 14th games in the continental showpiece.

Most importantly, Ravshan will be the first referee to officiate two Asian Cup finals having been handed the final between Australia and Japan in the 2011 Asian Cup in Qatar. Japan won 1-0.

The youngest-ever referee to officiate an Asian Cup final, Ravshan, who started his international refereeing career in 2003, will for his first time referee an encounter between Qatar and Japan.

However, the Uzbek has come across both teams separately, having refereed a total of 18 matches in various competition up to the 2019 final, 14 matches for Japan and 4 for Qatar, according to #mundial11.

In the Asian Cup 2019, Irmatov has been appointed four time times. He was in charge for Qatar’s won 1-0 quarter final win over South Korea and Japan’s last 16 1-win over Saudi Arabia 1-0.

Cool and quiet on the pitch, Ravshan in his 13 matches in the Asian Cup has awarded just one penalty, two red cards and 40 yellow cards.