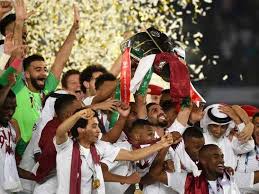 February 1 – The Qatar football project is bearing fruit. Ably supported by an army of Omanis who once again had driven across the border, this time in their thousands, to support them, Qatar lifted their first-ever Asian Cup in Abu Dhabi with a 3-1 win over a Japanese team that started as favourites.

Qatar have taken this tournament by surprise, no one more so than Amoez Ali whose individual brilliance for the first goal set a new scoring record, secured his position as the tournament’s most valuable player and sparked Qatar into the self belief that they weren’t here just to make up the numbers.

It was a Qatar performance based around their natural pace and power on the counter attack with Afif threatening every time he had the ball, Abdelaziz Hatim and Hasan Al Haydos pushing and probing through the middle and the marauding strength of two wing backs who moved swiftly from a back five to support a flying attack.

But it was a deep lying defence where the hard graft was done, especially in the second half. Japan spent long periods in the in possession but could never quite find the final ball in attacking areas against a dominant Qatari defence in the air but who were less secure on the ground.

It was a 30-minute spell in the first half that turned this game for Qatar. Japan had most of the early possession but a counter attack on 11 minutes saw Akram Afif receive the ball on the left and chip over the defence to Almoez in the box with his back to goal.

Almoez took the ball in with his left foot, teed it up with his right and bicycled kicked it into to the bottom left of Japan keeper Shuichi Gonda’s goal. It his ninth of the tournament and a goal to grace any final anywhere in the world.

The Omani fans went wild, only to be excited again seconds later with Almoez was put through again and with only keeper. Suddenly Qatar, who up to that point had been second best, came to life with more urgency and forward penetration. The Japanese were shellshocked.

Just 15 minutes later Qatar struck again and it was another special goal from Abdel Aziz Hatim who collected the ball on the top of the box and hit a left foot shot into the top right out of the reach of Gonda’s despairing dive.

Qatar were on fire and deserved a third with a breathless move that saw the ball sweep right to left and into the box as Qatar’s speed of pass pulled the Japanese defense apart with the ball arriving to the imperious Almoez wide of the goal whose shot at pace hit the left post.

It was too good to be true and Qatar found in Japan an opponent that was neither afraid of hard graft nor knew when to give up.

Japan closed out the first half playing closer tighter and through the middle with sharper passing and starting to build a little more pressure. It was a pressure that built through the second half.

A Japan goal became almost inevitable once they realised they had more chance with the ball on the floor than in the air. A mix up on the edge of the Qatari box with Japanese players swarming saw the ball cannon to Japan keeping the ball ion the floor the ball cannoned of a Qatari defender to land at the feet of Takumi Minamino who calmly slotted past Al Sheeb.

Japan were back in the game for real and had plenty of chances to equalise but the finalo killer ball was still proving elusive.

A counter attack saw a shot from Hatim deflected over the bar for a corner. The Omanis were baying as the corner was curled in and VAR judged that Japan’s excellent captain Maya Yoshida had handballed. Qatari skipper Al Haydos calmly slotted the ball away.

Japanese coach Hajime Moriyasu said: “In the second half we had more power in the attack. We had the chances to tie the game but losing two goals was difficult and Qatar really had a tight defence.” But praising his young players he said that they must “stay hungry” and that “his tournament will be the basis for Japan for the future.”

Japan are a work in progress. Qatar are much further along that development line. Summing up, Qatar coach Felix Sanchez said: “We played a fantastic 30 minutes where we scored two goals and had other chances.” Nothing else mattered in the end.