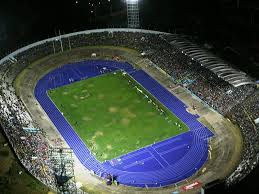 May 22 – Tickets for the Jamaican round of this summer’s Concacaf Gold Cup on June 17, to be played in the National Stadium in Kingston have gone on sale.

This is the first time in the history of the Gold Cup that matches will have been played outside the US, with the day before Costa Rica also hosting a double header of group B matches.

The 35,000-capacity National Stadium in Kingston, Jamaica – which has a statue of Bob Marley at the entrance, will host the double header Group C matches beginning with Curacao vs El Salvador, before the Reggae Boyz take on top group seeds Honduras.

The expanded 16-team Gold Cup kicks off on Saturday, June 15 at the Rose Bowl in Los Angeles, and will see matches played in 15 US metropolitan areas with the final being played at Chicago’s Soldier Field.

Tickets to the Gold Cup doubleheader in Kingston’s National Stadium are on sale now via thisisours.goldcup.org or by visiting www.caribtix.com/goldcup

Tickets & Hospitality Packages to all Gold Cup matches are available by visiting www.GoldCup.org