12 team tournament with Brazil as guests

The next Gold Cup was therefore scheduled for July 2003 and would be co-hosted by the USA and Mexico, with games being played in the Orange Bowl in Miami, Gillette Stadium in Foxborough and the Azteca Stadium in Mexico City, which would host the final.

12 teams would again compete for the Gold Cup, with Canada, Mexico and USA all automatically qualifying, with Colombia and a Brazil Under-23 side invited to play in the tournament.

In the Caribbean, the teams entered a qualification tournament in place of the Caribbean Cup, which was postponed for 2003.

The lowest ranked 16 nations took part in a preliminary round, with some big scores and some mismatches taking place, such as Grenada beating Saint-Martin 15-4 on aggregate and the two Virgin Island nations shipping double figures in their matches against Saint Lucia and Dominican Republic and the likes of Guyana and Aruba crashing out early on.

The surviving eight teams went into four groups of four teams, with the top two qualifying for a final round.

Group A was reduced to three teams when Dominica pulled out, but the one less team didn’t help any of the remaining teams as all three managed to win one and lose one. Trinidad and Tobago managed to win the group on the basis of a 2-0 win over Saint Kitts and Nevis, with their 1-0 defeat against Saint Lucia meaning more for their opponents. Saint Lucia had lost 2-1 to Saint Kitts, but the win over Trinidad gave them a zero-goal difference and second place in the group.

It was clear who would be going through from Group B after the first round of games, with Martinique beating Dominican Republic 4-0 and Cuba putting five past the Cayman Islands. Cuba then won the other two games in the group, including a 2-1 win over Martinique, but the French territory then beat the Cayman Islands 3-0 for second place.

Jamaica won Group C with an undefeated record, but they made hard work of it to begin with, only drawing with Barbados through a Paul Hall last minute goal, then beating Guadeloupe 2-0 before ending the group stage with an impressive 4-1 win over Grenada. Barbados were the unlucky team to finish third after when they went down to an Alain Vertot penalty in a 1-0 defeat to Guadeloupe.

Group D went from four to three teams after Suriname dropped out, but it wasn’t going to stop Haiti, who won 1-0 against Antigua and Barbuda and 3-0 against Netherlands Antilles to win the group. The Antiguans went through in second with only a point to their name after a 1-1 draw with Netherlands Antilles, but with a better goal difference.

The final stage saw the remaining eight teams separated into two groups, with the top team qualifying automatically for the Gold Cup and the runners-up entering the final playoff round.

Group A saw Jamaica assert their authority straight away with a 5-0 win over Saint Lucia, while Haiti beat Martinique 2-1, making it look like a straight battle between the two for the top spot.

However, Saint Lucia hadn’t read the script and they shocked the Haitians with a David Flavius goal that gave them a 2-1 win and a chance of at least securing second spot, particularly after Martinique threw away a two-goal lead and allowed Jamaica to equalise in the last minute and, seemingly, end their own chances of qualification.

The final round of games saw Jamaica secure qualification with a 3-0 win over Haiti. That defeat sent Haiti out and left the playoff place up for grabs between Martinique and Saint Lucia and these two teams ended up playing a crazy game which saw Saint Lucia 4-1 up after 56 minutes, but a miracle comeback from Martinique saw them draw level, then win the game in the last minute from a Miguel Duragrin goal to secure a playoff place.

Group B was less chaotic as Trinidad and Tobago and Cuba won their first two games against Guadeloupe and Antigua and Barbuda to set up a winner take all game for the Gold Cup place.

After Guadeloupe ended their campaign with a 2-0 win over the Antiguans, the top two took the field and, after 18 minutes, it looked like the Trinidadians would be winning their way into the Gold Cup. However, Jorge Ramirez equalised just eight minutes later and the Cubans secured another Gold Cup qualification and sent Trinidad and Tobago into the qualification round with two goals in five minutes by Lester More and Maykel Galindo that secured a 3-1 win for Cuba.

The 2003 UNCAF Nations Cup saw Belize decline to enter, so six teams would be playing off for three places in the Gold Cup, plus a playoff place for fourth place. A new format change brought all six teams together in a round-robin competition.

It became clear early on who would qualifying for the Gold Cup as Costa Rica battled to 1-0 wins against El Salvador and Nicaragua, while also drawing with Guatemala, a rising force in the region.

As the tournament wore on, the Costa Ricans did the work necessary to secure Gold Cup qualification and a final day 1-0 win over Panama won them the tournament, while after a defeat by hosts Panama, Guatemala won every other game to secure their place in the 2003 Gold Cup and El Salvador beat every team below them to finish 3rd and clinch the final place in the Gold Cup.

Honduras and Panama finished the tournament level on points, goal difference, goals scored and the result between the two, so the place in the playoff tournament went down to the drawing of Lots, which Honduras won to secure fourth place.

Martinique played host to the playoff tournament, with the hosts, Honduras and Trinidad and Tobago playing off for the final two places in the Gold Cup.

Martinique started the tournament against Caribbean rivals Trinidad and Tobago and it looked like the Trinidadians would get their qualification off to the right start when they were 2-0 up at halftime. Martinique weren’t finished though and made a memorable comeback to win 3-2, leaving Trinidad and Tobago with a must-win game against Honduras.

It wasn’t to be, however, as Honduras controlled the game and won 2-0 to secure their qualification and put Trinidad and Tobago out. Honduras then won the group with a 4-2 win against Martinique, but it was a game that carried little jeopardy for either side as they both went to the Gold Cup. 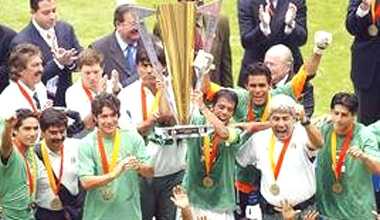 With qualification completed, the 12 competing nations came together in the USA and Mexico for 15 days of Gold Cup action.

In Group A, played in the Azteca Stadium, Mexico began their tournament in grand style by beating Brazil 1-0, with Jared Borgetti getting the only goal. They weren’t an exciting team to watch, particularly after a goalless draw against Honduras, but they topped the group ahead of Brazil, who struggled to a 2-1 win over the Hondurans to secure second place.

Groups C and D were played at the Gillette Stadium in Foxborough, the first Northern US city to host a Gold Cup game. Group C saw the hosts dominate proceedings, winning 2-0 both times against El Salvador and Martinique, with Brian McBride scoring three of the goals along the way. El Salvador won the battle for second place with a nervy 1-0 win against Martinique, who were unlucky to go home pointless.

Group D was the closest of the competition, with each team winning a game and losing a game. Canada started off with a 1-0 win against Costa Rica, but a 2-0 defeat by Cuba became more damaging than they expected as although Cuba then lost 3-0 to Costa Rica, their two goals put them through on goals scored ahead of Canada, but behind Costa Rica on goal difference.

Cuba’s luck ran out in the Quarterfinals at Gillette Stadium as they ran into a destructive performance from the hosts. Landon Donovan had a massive day, scoring two in three minutes early on, then adding two more in the second half, with Steve Ralston adding one of his own for a 5-0 win that put the USA through.

The next Quarterfinal was a level contest for about an hour between Costa Rica and El Salvador at Gillette Stadium as El Salvador came from behind twice to be level at 2-2. A Walter Centeno penalty after 68 minutes finally broke the Salvadorian resistance and Steven Bryce and a hat-trick penalty goal by Centeno put Costa Rica through with a 5-2 win.

The Orange Bowl played host to an all-South American Quarterfinal as Colombia and Brazil took to the field to decide who would face the Americans in the Semi-finals. A future Ballon D’Or winner was the catalyst for a Brazilian win as Kaka bagged a brace to win the game 2-0 for the World Champions.

The final Quarterfinal was another one-sided encounter as Mexico tore apart the Jamaicans in front of 10,000 fans at the Azteca Stadium. The Jamaicans had held out for over 35 minutes before the first goal was scored by Omar Bravo, but they capitulated after that goal, with five different Mexican players getting on the scoresheet in a 5-0 win.

The first Semi-final in the Orange Bowl pitted the hosts against the World Champions and produced drama and heartache in equal measure. The USA scored first after an hour when Carlos Bocanegra climbed highest to head home a Beasley free-kick and it looked like that would be enough as the game edged towards injury time. However, after Ewerthon sped through the American defence in the last minute, his shot was saved by Kasey Keller, but it dropped into the path of Kaka, who wasn’t going to miss from there.

That took the game to extra time and the threat of a golden goal was prevalent throughout the first period. The Americans had their chances, but became the authors of their own downfall when a loose ball fell into Kaka’s path in the area, his shot was defended by Corey Gibbs with his hand.

This led to the American defender being sent off for deliberate handball and a penalty for Brazil, which Diego dispatched to put Brazil through 2-1.

The other Semi-final was less dramatic as Mexico took on Costa Rica in the Azteca Stadium. The Mexicans had not conceded a goal yet in the tournament and they weren’t about to start now against their Central American rivals.

Rafael Marquez scored the opening goal with an opportunistic lob from 40 yards out which caught out Ricardo Gonzalez in the Costa Rican goal and Jared Borgetti was left unmarked in the area after Gonzalez parried a Marquez free-kick into his path to stab home the goal that ended the game after just 28 minutes. Costa Rica couldn’t respond and Mexico were able to play out the rest of the game to make it to the final against Brazil.

The USA and Costa Rica played out a classic encounter in the 3rd place playoff, with the USA clinching third with a 3-2 win, but it was an anti-climax for an American side that had expected more.

Their neighbours Mexico then prepared to host Brazil in front of 85,000 fans at the Azteca Stadium the next day, boasting a defensive record of zero goals conceded and looking to keep another clean sheet against a youthful Brazil side.

It was the Mexicans who dominated the game, hitting the post on two occasions and Gomes making several high-quality saves to deny Borgetti and Osorno, while Brazil only occasionally threatened during the 90 minutes.

It ended 0-0 at the end of normal time, so the 2003 Gold Cup would go to golden goal extra time and penalties if required.

In the end, penalties were not required as Daniel Osorno dribbled across the front of the Brazilian defence and the penalty area, found a bit of space and then fired a left-hand drive that flew past Gomes and won the game for the Mexico. It brought about scenes of wild celebration as Mexican players, coaches and fans alike celebrated their fourth Gold Cup triumph.