With the USA preparing to host the World Cup in 1994, the 1993 Gold Cup gave the Americans a chance to see where their team was ahead of the big tournament and the tournament organisers an opportunity to see how prepared the Cotton Bowl in Dallas would be for hosting six games in the tournament. It would become a tournament saw Mexico re-establish themselves as the dominant power in Football in the Americas.

The tournament would see Group A games and a Semi-final take place in Dallas and Group B games, a Semi-final, the 3rd place playoff and the Final being played at the Azteca Stadium as Mexico took on co-hosting responsibilities for the competition.

As with 1991, all three North American zone countries qualified automatically, with Canada joining the two host countries in the finals tournament, while the two finalists from the 1993 Caribbean Cup and top three nations from the 1993 UNCAF Nations Cup would qualify as part of the eight team field.

In the Caribbean Cup, as with 1991, Jamaica and Trinidad and Tobago qualified for the finals tournament as hosts and holders respectively, and the qualification tournament saw Saint Lucia qualify from Group 1 in Grenada, joined by Saint Vincent and the Grenadines, who were given the place of Surinam for unknown reasons after Surinam had qualified by a walkover from Group 3.

Puerto Rico won all three games in Group 3 to finish ahead of Barbados, Guyana and Cayman Islands, while Sint Maarten, Saint Kitts and Nevis and Martinique all won both matches in their groups to qualify for the finals tournament.

Group A saw 40 goals scored in six games, with some big scores being racked up, including a 6-2 win by Jamaica against Sint Maarten and a 7-4 win for Saint Kitts and Nevis against the Puerto Ricans.

Jamaica topped the group with three wins from three, while Saint Kitts and Nevis bounced back from a 4-2 defeat by Jamaica with two big wins to secure second place, sending Puerto Rico and Sint Maarten out.

Group B saw just as much drama as while Martinique won the group with three wins from three games, it was much closer between Trinidad and Tobago and Saint Lucia, with the Trinidadians only just making in through as runners up on goal difference.

Their luck was to run out in the Semi-finals after Jamaica put them to the sword with a 3-0 defeat that sent them out and put Jamaica into the final and the Gold Cup.

The other Semi-final produced a much closer and more dramatic affair. It saw Martinique take the lead and look to have held on until Austin Higgins equalised in the last minute. This took the game to extra time and penalties, which Martinique won 4-3 to make their second Caribbean Cup final and secure their first qualification for the Gold Cup. They then went on to secure their first Caribbean Cup after a 6-5 penalty shootout win over the Jamaicans following a goalless draw.

The UNCAF Nations Cup took place in Honduras, with all games taking place at the Estadio Tiburcio Carías Andino. There were a reduced number of entrants for this tournament as Belize and Guatemala declined to enter, so only one qualification match was required, with Costa Rica beating Nicaragua 8-0 on aggregate.

The finals tournament saw the Hondurans, who came very close to winning the first Gold Cup in 1991, take advantage of being the host nation to win their first UNCAF Nations Cup as they won all three games, securing the title with a Nicolas Suazo hat-trick for a 3-0 win over El Salvador.

Costa Rica joined them in second place after wins against El Salvador and Panama, while the Panamanians secured third place and qualification for the Gold Cup due to a better disciplinary record than the El Salvadorians, after they could not be separated by goal difference or goals scored. 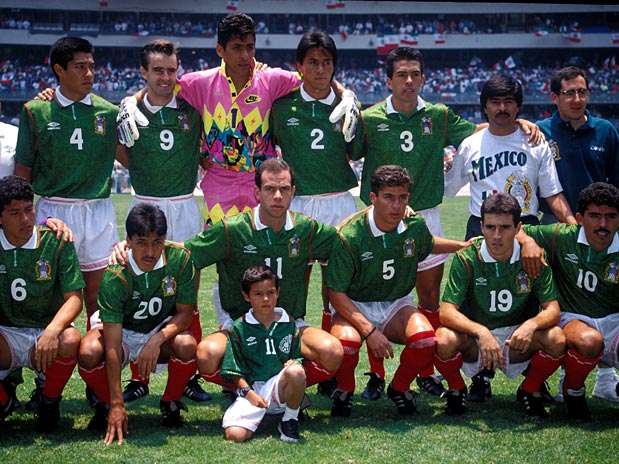 The 1993 Gold Cup kicked off on 10th July with a double-header at the Dallas Cotton Bowl that saw Honduras put five past tournament debutants Panama and the defending champions the USA open with a 1-0 win over Jamaica.

The Americans won the group with a 2-1 win against Panama after falling behind, then edged out Honduras with an Alexis Lalas goal. Jamaica bounced back from their opening game defeat to beat Honduras 3-1, then held on against Panama for a 1-1 draw that saw them qualify for the Semi-finals ahead of a Honduras team that expected so much more, but went out following their defeat to the USA, with Panama joining them on the way out with just the draw with Jamaica to their name.

Group B was played at the Azteca Stadium and saw Mexico cruise through as group winners, racking up 9 goals against Martinique, including seven goals by Zague, and an 8-0 win against Canada. The only team to get close to them was Costa Rica, who secured a 1-1 draw that helped them go through as group runners-up, with Canada going home after the eight-goal thrashing by Mexico.

One criticism of the US part of the tournament was the low attendances at the Cotton Bowl, with an average of 14,647 fans, which left many seats empty in the 71,615-seater stadium. This wasn’t the case in Mexico where, after an opening day crowd of 48,000, the fans came in greater numbers, with 100,000 in attendance for the final group games.

It finished 0-0 after normal time, which brought about the first ever period of Golden Goal extra time in Gold Cup history. It would take a moment of skill to score a goal in a game as tight as this, and so it proved when Cle Kooiman volleyed home from a deflected Wynalda cross to give the USA a 1-0 win and put them into their second successive final.

The other semi-final, played in the cauldron of the Azteca Stadium and with 110,000 fans in attendance, was a much different game that was as good as over by half-time.

Mexico tore into Jamaica from the off and despite Hector Wright getting a goal back for Jamaica after Mexico had gone 2-0 up after Salvador and Mora goals, it proved to be the only high point of their day as Salvador completed his hat-trick in the 34th minute to send the Mexicans in at half-time 4-1 up, then Zague and Ambriz added a goal each to end the game as a contest just 10 minutes into the second half. The Mexicans then cruised through the remainder of the game to win 6-1 and put themselves into the final for the first time.

The Jamaicans picked themselves up three days later by securing a 1-1 draw with Costa Rica in the 3rd place playoff that saw both teams share third place after 120 minutes of Football and acted as a curtain-raiser to the final, which drew 130,800 fans to the Azteca Stadium for the eagerly anticipated final between Mexico and the USA.

It was a match that promised much, but instead showed the dominance of the Mexicans in CONCACAF Football as they simply blew away the Americans in a very one-sided final.

Once Nacho Ambriz scored a free kick from 40 yards out after just 11 minutes, it was always going to be a long way back for the Americans and they weren’t helped by a clumsy own goal by Desmond Armstrong, who ran into the path of a Zague cross and diverted it into his own net.

The game was up after that and Zague, with a close-range finish, and a scrambled effort by Cantu just showed the dominance of the Mexicans and left the Americans with much to ponder just a year out from the World Cup. It finished 4-0 and gave Mexico their first Gold Cup triumph, with Alves Zague the 11-goal top scoring hero for Mexico.