Runner Up – Brazil (as guests)

A number of changes occurred between the 1993 Gold Cup and the next edition, as the decision was made to move the tournament to the beginning of the year, with the third Gold Cup scheduled to take place in January 1996.

Another was the increase in numbers from eight to nine as Brazil were invited to compete as a guest nation. This was as part of a campaign to increase the profile of the competition and also allowed Mexico and the USA to become regular entrants in the Copa America.

The tournament went back to being solely hosted by the USA, with all tournament games to take place in California. The LA Memorial Coliseum became a tournament host for the second time, while Anaheim and San Diego provided new locations for tournament games.

It was a tournament plagued by organisational issues and controversies that, despite Concacaf General Secretary Chuck Blazer proclaiming that the tournament was a tremendous public success, saw many asking whether the tournament could succeed in its current form.

Among the biggest issues were US fans being shut out of broadcasts unless they had paid for DirecTV access, wrong anthems being played at tournament games and the Trinidad and Tobago team being forced to get lifts back to their hotel from fans after their coach was taken by VIPs. They were also robbed of around $50,000 of money and values from their hotel.

Despite these issues, the tournament saw an increase in attendances, helped by the number of fans living in California who hailed from the Central American countries, and it saw some high-quality games.

The qualification process remained the same from the previous two tournaments, with all three North American zone countries in Canada, Mexico and the USA qualifying automatically, and two places for the Caribbean zone and three for the Central American zone at stake.

The 1995 Caribbean Cup saw more teams than ever enter the competition, with 22 teams entering the fray.

Qualifying for the final tournament, which saw Jamaica and Cayman Islands qualify as hosts and Trinidad and Tobago as holders, saw two group stages and three knock-out groups for the five places in the final’s tournament.

Cuba dominated Group 1 in the Dominican Republic, winning all three games against the hosts, Netherlands Antilles and Puerto Rico and scoring 15 goals in the process, while French Guiana were left thankful for their greater goal difference after they, Martinique, Guadeloupe and Surinam all won one, drew one and lost one in Group 2, with French Guiana’s 4-0 win against Surinam proving decisive.

In Group 3, Barbados and Saint Lucia eased through their first-round matches, Barbados beating Guyana 7-0 on aggregate and Saint Lucia putting six past Grenada in total. Saint Lucia then held their nerve in a tense second round match, securing a 2-1 win in the second leg after a 1-1 draw away to secure qualification.

In Group 4, Montserrat won the battle of the minnows, beating Anguilla 6-2 on aggregate, but were them mercilessly thrashed home and away by Saint Vincent and the Grenadines who, after edging out Dominica 1-0 on aggregate, won 9-0 at home and 11-0 away for an easy qualification.

Group 5 proved a lot closer with Antigua and Barbuda and Saint Kitts going all the way to penalties in their second-round game after Saint Kitts put Sint Maarten to the sword in the first round and Antigua secured a walkover win against the British Virgin Islands. The Antiguans held their nerve to win 4-3 on penalties.

The finals tournament saw Saint Vincent and the Grenadines and the Cayman Islands dominate Group A, each beating Antigua and Barbuda and French Guiana in their opening group games, then playing out a 2-2 draw in the final group game that left Saint Vincent top of the group on goal difference.

They were joined in the Semi-finals by the holders Trinidad and Tobago and Cuba, albeit only on goal difference in Trinidad’s case and the result of the game against Jamaica in Cuba’s case. All three teams finished on two wins and took a win off of each other, but Cuba’s 2-1 win against Jamaica proved enough to secure their place in the Semi-finals, with Jamaica left ruing that defeat and a goal conceded against Saint Lucia.

The Semi-finals saw the Cayman Islands fairy-tale come to a brutal end as Trinidad and Tobago beat them 9-2, while after three goals in five minutes gave them a cushion, Saint Vincent were able to hang on against Cuba to win 3-2.

Trinidad then asserted their authority as the dominant force in Caribbean football with a 5-0 win against St Vincent, who took consolation from their Gold Cup qualification.

In the 1995 UNCAF Nations Cup, a change in format occurred, with six teams playing in the final tournament in El Salvador, with a knockout stage now part of the tournament. The two finalists and winner of the 3rd place playoff would qualify for the Gold Cup.

All seven UNCAF members entered the competition, necessitating a preliminary round between the two lowest ranked nations, which Panama won easily, winning 2-0 at home and 5-0 away against Nicaragua.

Group A brought the hosts, Costa Rica and tournament newcomers Belize together and produced a surprise as El Salvador won the group, beating Belize 3-0, then celebrated a famous 2-1 win over Costa Rica, who finished second after a late Mauricio Wright goal saved them from embarrassment against Belize, who lost both games, but impressed on their tournament debut.

Group B followed the same trend as Group A, with Honduras winning both games without conceding a goal, beating Guatemala and Panama 2-0. The Guatemalans finished second in the group after a 1-0 win against Panama.

The Semi-finals brought two closely contested games, with Honduras making the final after a penalty shootout win over Costa Rica following a 1-1 draw, while Guatemala put the hosts out after an early Rodas goal proved enough for a 1-0 win.

With qualification for the Gold Cup at stake, the 3rd place playoff took on more significance. El Salvador dealt with the pressure better and repeated their group stage win over Costa Rica, winning 2-1 to secure their first Gold Cup appearance. 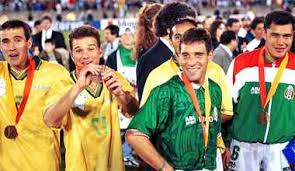 With nine teams now entering the Gold Cup, the group stages saw three groups of three teams drawn, with the group winners and the best runners-up qualifying for the Semi-finals. It meant each team would play just two games and every result counted towards qualification.

Group A saw the defending champions Mexico win both games, beating St Vincent 5-0 and then sneaking a 1-0 win against Guatemala after a last minute Eustacio Rizo goal

Guatemala took second place and gave themselves an excellent chance to qualify for the Semi-finals with a 3-0 win over St Vincent that gave them a +2-goal difference.

In Group B, the guesting Brazil, who played their Under 23 team in preparation for the Olympics, were the class act of the group, beating Canada 4-1 and then putting five past the Hondurans to easily win the group. Canada took second place after starting their tournament with a 3-0 win over Honduras, but they would be left to rue the size of their defeat against Brazil.

Group C followed the same theme as the other two groups, with the USA, invigorated by a successful World Cup, beat Trinidad and Tobago in a 3-2 thriller then, in front of 52,345 fans in Anaheim, beat El Salvador 2-0 with late goals from Eric Wynalda and Marcelo Balboa to win the group.

El Salvador, in their first Gold Cup, won their opening game against Trinidad and Tobago 3-2. But saw their Semi-final hopes dashed by their defeat by the USA, while Trinidad and Tobago departed after a string of misfortunes and organisational issues made their tournament experience a bitter one.

The Semi-finals brought a World Cup re-match and the battle of old vs new powers in Central America.

The USA took on Brazil in a repeat of their 1994 Second Round match. It proceeded to follow how the World Cup game went, with Brazil struggling to break down a determined USA defence and the Americans looking for a counter-attack chance. It would take either a moment of brilliance or misfortune to decide the game and so it proved when Marcelo Balboa, the hero of the El Salvador game, put through his own net to give Brazil the only goal of the game. It was desperately bad luck for the hosts, but put Brazil through to the final.

They would be joined in the final in Los Angeles by the defending champions Mexico, albeit only after a fortunate Cuauhtemoc Blanco goal on the hour, when he danced into the Guatemalan penalty area and hit a shot that was weak, but was helped into the goal by a desperate clearance attempt from Funes for the only goal of the game

Chaos reigned before the finals day as fans with tickets were denied entry, while a large number of counterfeit tickets were found to have been used to gain entry and it took two hours to drive the final three kilometres to the stadium.

Finals day began at the Memorial Coliseum with the USA clinching 3rd place with a 3-0 win over a Guatemala side who could have been forgiven for their performance after traffic issues on the way to the stadium meant they arrived just 30 minutes before the game, then, in front of 88,155 fans who came from over the border and around the local area, Mexico took the field against Brazil.

After all the issues leading up to the final, the football came as something of a relief and Mexico proceeded to dominate the game, regularly picking holes in the Brazilian defence and making chances. Brazil held out as best as they could, but they finally faltered when a Zague pass found Luis Garcia in space in the box and he turned quickly to score and put Mexico 1-0 up.

Blanco then made the game safe when he played a 1-2 with Garcia and hit a low drive for the second goal. Brazil had no response and Mexico were able to celebrate their second Concacaf Gold Cup in succession.

As they celebrated, Concacaf were left to count the cost of a tournament that made a profit, but was an organisational farce at times and a public relations disaster at others. A lot of work would be needed before the 1998 tournament.