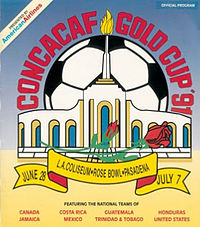 The inaugural CONCACAF Gold Cup was put together as a replacement for the CONCACAF Championships, which had acted as a World Cup Qualification tournament, but without Mexico in the last two editions, which had affected the credibility of the tournament.

CONCACAF made the decision to create a stand-alone tournament and selected the USA to be the first hosts in 1991, playing all tournament games with the eight qualifying teams in the 93,000-seater Memorial Coliseum in Los Angeles and the 92,000-seater Rose Bowl in Pasadena.

It was decided ahead of the tournament for Costa Rica to qualify as the defending champions from the 1989 CONCACAF Championship and for the other qualifiers to come from the three zones within CONCACAF of the Caribbean zone – the Central American zone and the North American zone, although this zone only had Canada, Mexico and USA within that zone, so all three qualified automatically.

This left four places up for grabs for the other zones, with the Caribbean and Central American zones having two places each for their countries to qualify for.

In the Caribbean, the two finalists in the 1991 Caribbean Cup were designated as qualifiers. Jamaica as hosts and Trinidad and Tobago were automatically qualified for the final tournament.

This left 16 teams separated into six groups, with one team acting as hosts. In Group 1, held in Puerto Rico, the Dominican Republic managed to edge out region powerhouses Haiti on goal difference after they conceded one less goal than the Haitians against Puerto Rico.

Goal difference also put Martinique through in Group 2 on home territory after they, French Guiana and Guadeloupe all managed to win one and lose one, with Martinique’s 3-1 win against Guadeloupe proving decisive.

Group 3 never happened as Cuba were given a bye to the final tournament, supposedly because of regional strength (although they later pulled out of the finals tournament), while Cayman Islands stayed undefeated in Group 4 to qualify ahead of the hosts Saint Kitts and Nevis and the British Virgin Islands.

Group 5 was an all-South American affair, with hosts Guyana qualifying on goal difference ahead of Surinam and Netherlands Antilles, while St Lucia dominated Group 6, winning both games at home against Montserrat and Anguilla and not conceding a goal.

The finals tournament in Jamaica saw where the regional strengths lay in Caribbean football, with Jamaica and Trinidad both winning their groups. Guyana and Saint Lucia both won the games necessary to finish runners up, but were no match for the hosts and holders in the semi-finals, leaving Jamaica and Trinidad and Tobago as finalists and Gold Cup Qualifiers. Jamaica then won the final 2-0 to win their first Caribbean Cup.

In Central America, the UNCAF Nations Cup was created to provide the countries in the region with more competition and provide two nations with a qualifying place alongside Costa Rica in the Gold Cup.

The Preliminary round saw home and away qualifying games to decide the three finalists alongside Costa Rica.

Honduras made it through, but only after a Luis Orlanda Vallejo hat-trick turned around a two-goal deficit against Panama. El Salvador’s progress was slightly easier against Nicaragua, with a 2-0 home win securing a place in Costa Rica after a tight away win. Guatemala had the easiest qualification, making it to Costa Rica by walkover after Belize withdrew because of financial issues in the national game.

The finals tournament, played at the Estadio Nactional in San Jose, saw the hosts win the competition with relative ease, a 7-1 win against El Salvador the highlight. Honduras claimed second place with a 2-1 win against the Salvadorians, while Guatemala failed to score a goal, but two draws was enough for them to qualify ahead of the unfortunate El Salvador team. 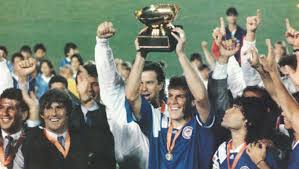 The finals tournament of the first Gold Cup began at the LA Memorial Coliseum on June 28 with the first two Group A games as both Honduras and Mexico scored four goals, beating Canada and Jamaica respectively and setting themselves out as the teams to beat.

Honduras then secured their place in the Semi-finals with a 5-0 thrashing of the Jamaicans, while Mexico eased to a 3-1 win over Canada. The Canadians left the tournament with at least a win under their belts after beating Jamaica 3-2, leaving the Caribbean champions pointless after three games, while Honduras secured top spot in the group after a 1-1 draw with Mexico.

Group B saw some thrilling games at the Pasadena Rose Bowl, with the USA clinching a 2-1 win against Trinidad and Tobago with two goals in the last five minutes, while the Trinidadians then beat Costa Rica 2-1 with a last-minute goal of their own.

The hosts won all three group games to qualify in top spot, while Costa Rica were left thankful for a Luis Espel goal in the 89th minute that saw Guatemala win 1-0 against Trinidad and Tobago and helped Costa Rica qualify on goal difference in second place.

Both Semi-finals took place on 5th July at the LA Memorial Coliseum and brought together the two stronger nations and two emerging forces from Central America.

Honduras and Costa Rica played the first Semi-final, with the Costa Ricans favoured after their recent World Cup appearance and dominance of the UNCAF Nations Cup.

However, Honduras dominated proceedings, with Jose Eduardo Bennett diving to head home the opening goal after 37 minutes, then Mario Flores finished off a quick break after 79 minutes to send the jubilant Hondurans into the final.

Following this, the hosts USA met Mexico in a game many thought would be the final. After a tense and scoreless first half, John Doyle volleyed home after a Kinnear free kick wasn’t cleared after 48 minutes. With the Mexicans chasing the game, a long clearance went into the path of Peter Vermes, who cut inside and unleased a 30-yard volley than flew into the top corner and put the USA into a final they were now favourites to win.

The 3rd place playoff and final took place two days later at the Coliseum, with Mexico securing the Bronze with a 2-0 win against Costa Rica, before the USA and Honduras stepped out to contest the first Gold Cup final.

With so much at stake, it turned out to be a disappointing game with few chances on either side over 120 minutes. The first Concacaf Gold Cup ended in a goalless draw and would be decided in the lottery of penalties.

Thus, began a nervy exchange of penalty kicks that saw both teams score their first penalties, then miss three of the next four to take the contest into sudden death. After a miss and a success each, Fernando Clavijo scored his penalty to give the USA a 4-3 lead, leaving Juan Espinoza to try and level the scores.

Unfortunately, his penalty took flight and went over the bar, leaving the USA to celebrate their first ever title and the honour of becoming the first Concacaf Gold Cup Champions.