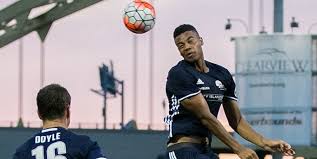 June 14 – It may, to Costa Rican fans, be just a taster for the eagerly awaited second part of a double header featuring the joint hosts but to Haiti and Bermuda, Sunday’s opening Gold Cup fixture in San Jose will means absolutely everything when the pair open Group B and go head to head for the first time since 1992.

Just like Iceland captured the hearts and minds of neutrals at both the World Cup and European Championship, so Gold Cup debutants Bermuda, the British territory with a population of around 65,000 are hoping to write their own Cinderella story.

The Gombey Warriors are ranked 175th in the world by FIFA and have already virtually achieved the impossible in a country where cricket is the number one sport.

“We’re all warriors, we are a small nation and we’re punching above our weight,” said defender Dante Leverock. “Even now, first time in history, making a Gold Cup is monumental for us. It’s also monumental for the country and the next generation. It’s important that we do well, represent ourselves well, the boys are buzzing and excited to go.”

Leverock says the fact that so many of his teammates grew up together can only augur well.

“This group, we’ve been together for a very, very long time. It doesn’t seem real yet but I think once the first whistle goes when we’re there, I’ll embrace that moment.”

Hundreds of excited Bermuda fans, clad in blue and pink, have flown in to watch their team. Haiti, who twice reached Gold Cup quarterfinals (in 2002 and 2009)  may be favourites after qualifying for the seventh time but that doesn’t phase their opponents.

“The Gold Cup is huge for us,” said Bermudan businessman and veteran coach Paul Scope. “I’ve been in Bermuda for 35 years and have been in football all that time.

“I came in 1983 and heard about the team [in 1967] that went to the Pan American Games. We had some talented players — that was the last golden era. “Here we are, all these years later, deservedly qualifying. We’re a much more resilient team now.”

Haiti will start firm favourites. Having only lost 2-1 to Chile in a recent friendly proved their credentials especially on the counter-attack.

Coached by Marc Collat, in his second stint as Haiti manager, Collat has had a long career taking in youth director at PSG as well as France’s Olympic team. He has previously reached the quarter final stage of the competition and will be looking for at least the same again.