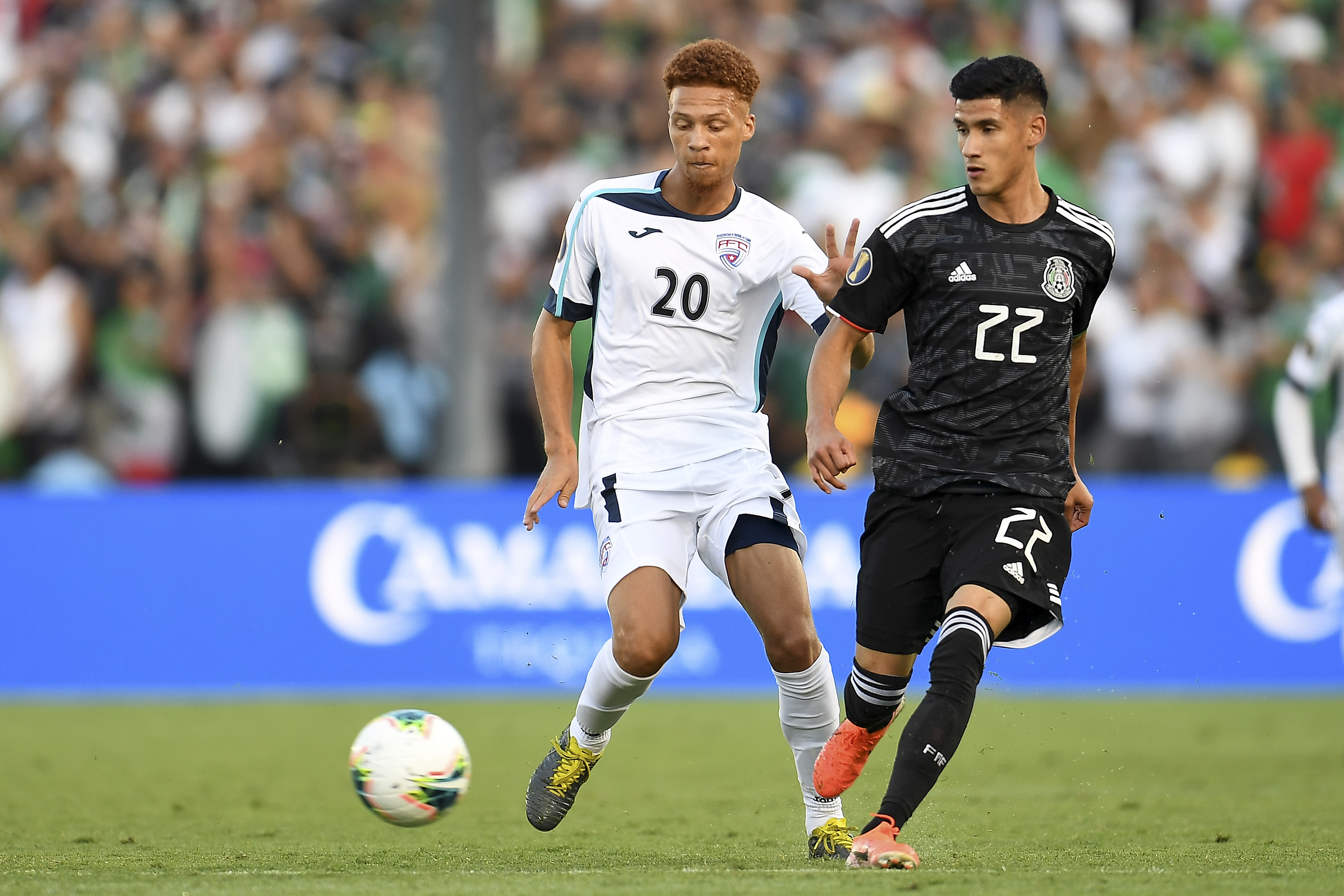 June 15 – Mexico opened their 2019 Gold Cup campaign with a bang, scoring after just two minutes against Cuba before going on to thump in six more goals to demonstrate why they are tournament favourites. They will have much harder games than this but even so it was a message emphatically delivered.

This is already a much better Mexican team under Gerardo Martino than the one which beat Germany 1-0 at the Russian World Cup last summer.

It couldn’t have been a better start for Mexico. Jesus Gallardo’s cross was knocked on to the post by Raul Jimenez only to be tapped in on the rebound by Uriel Antuna after just 120 seconds.

Carlos Salcedo should then have doubled the lead on four minutes but pushed his header wide.

With the Mexicans fans massed behind the goal and baying for more, the Mexicans on the pitch repeatedly massed in the Cuba box, often with six players. On eight minutes Jimenez missed another free header. Cuba should have been three down. On 11 minutes the Mexican waves began to match the flow into the Cuban box. 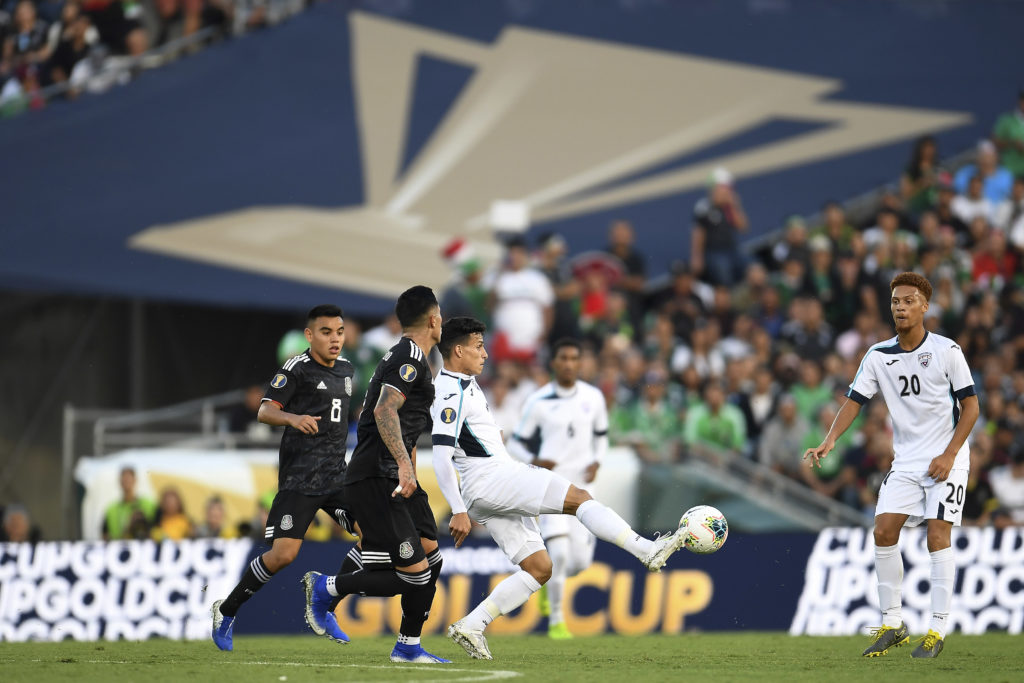 It took until the 31st minute for those waves of attacks to bring more goals with Wolves striker Raul Jiminez opening his Gold Cup account.

Just before half time another Mexican drive the right hand side saw the ball pulled back across the box for Antuna to score his second and Mexico’s fourth.

The highest ever win in a Gold Cup was Mexico’s 9-0 thumping of Martinique in the Azteca Stadium in Mexico City. Mexico, who had 13 shots in the first half, could have beaten that score in the first 45 minutes, such was their dominance. It was a masterclass in possession with Mexico’s passing accuracy at 94% and their possession stats at an overpowering 69%. 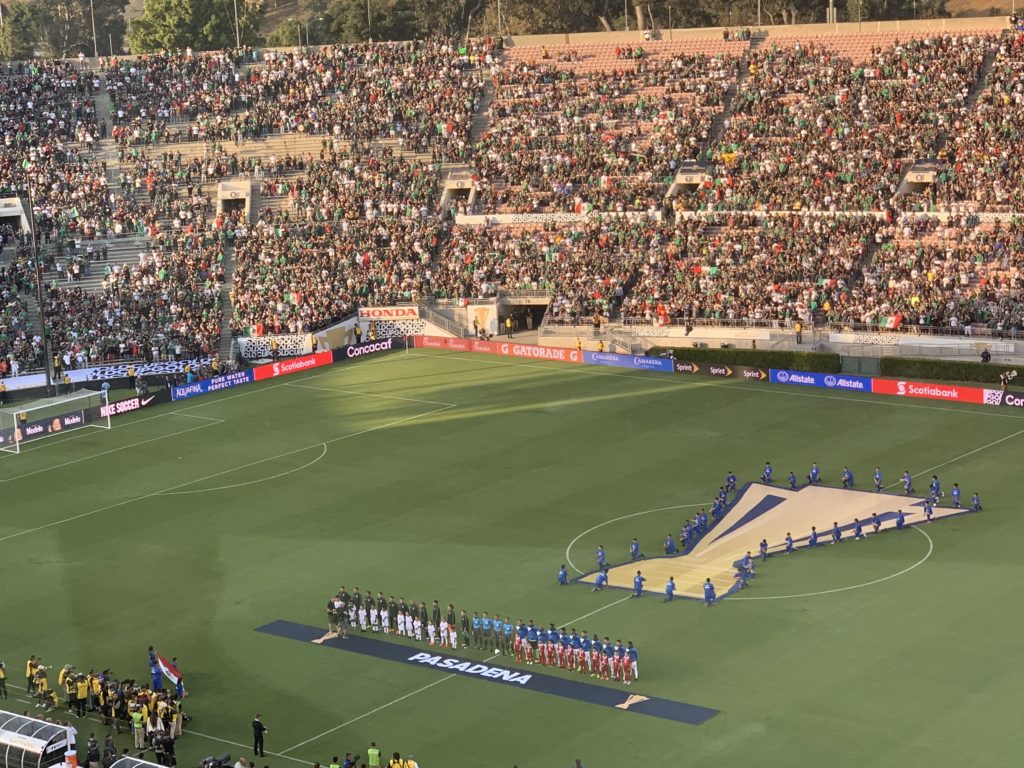 Cuba tightened up at the start of the second have, having learned the hard way that they needed more bodies behind the ball.

But the attacks kept coming and so did the goals. On 64 minutes a ball from Carlos Rodriguez split Cuba’s manfully porous defence for Jimenez to slide the ball in for his second

On 74 minutes Rolando Abreu sent a long cross field ball to Antuna attacking down the right who slid a pass across to Alexis Vega who scored with almost his first touch having just come on.

And on 80 minutes Rodriguez’s shot was well saved by Sandy Sanchez diving to his left, but only to push the ball into the path of Antuna for his hat-trick goal. It was a great night for the young Antuna who had been described as a “wild card” selection by his manager Gerardo Martino.

It took until the 87th minute to see any real attack from Cuba. Winning their first corner of the match, Luis Paradela headed over the bar. And that was that. Cuba escaped without any further damage.

Yesterday at their press conference Cuba reported that – unlike their missing striker Yordan Santa Cruz who had not been granted a US visa – their undelivered kit was on its way and would be in time for the game. A positive for Cuba was that it did arrive and from the press box it looked like it fitted.

Martino said after the match: “In these kinds of matches I like to feel my team are serious about the spectacle, what we have to do in 90 minutes and are respectful of our rivals. Despite some difficulties we were respectful of the whole situation.”

Mexico now face fellow group winners Canada in the heat and altitude of Denver on Wednesday. Canadian coach John Herdman said after Canada’s 4-0 win over Martinique that he would probably rotate his players for that match. Martino said his thinking was currently to keep with the same team.

In the other Group A game in Denver Cuba and Martinique will be playing for pride. It had been a grim day for both of them in Pasadena.