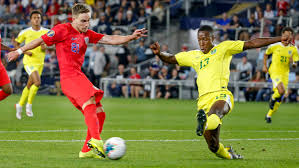 June 21 – He’s the new US goal scoring hero with a man of the match performance. But it could all have been so different.

Not many US fans may have even heard of Tyler Boyd a few weeks ago but almost over overnight at the Gold Cup, they have taken the former New Zealand international to their hearts.

It could hardly have gone much better for Boyd in his adopted country’s opening game at the tournament last Tuesday – their first competitive match for 20 months – and all eyes will be on him again on Saturday when the joint hosts take on Trinidad and Tobago in Cleveland.

After switching affiliation from New Zealand, for whom he won six caps, Boyd had a less than distinguished debut for the US debut in a 3-0 defeat to Venezuela earlier this month. But it all came good when it mattered most – watched by his parents who had flown in from New Zealand to Minnesota.

“Just a dream come true,” Boyd said after a second-half brace in the 4-0 trouncing of Guyana. “It’s been years and years of work to get to this moment.”

To make matters even more special, Boyd’s first goal after 52 minutes when he gathered a long ball and lashed it home, marked the 1,000th goal in US history, in their 700th game.

Afterwards he wanted to run towards his parents to celebrate but did not know which section they were sitting in. “I was looking around for them but I couldn’t see them. It was an unbelievable moment for me to share that with my parents and to give my mum my jersey after the game,” he said.

Boyd, whose skills have improved over the past two seasons with spells at Ankaragucu in Turkey’s top division and Portugal’s Vitoria Guimaraes, played for New Zealand at the 2013 Under-20 World Cup but switched allegiance just last month after FIFA approved his application.

He admits he knew little about his new international teammates at first.

“I came in not knowing anyone personally, obviously I knew the players as players, but not personally. But what an amazing group to be a part of. They have made me feel welcome since day one. I feel like part of the family, part of the brotherhood so it’s been easy from that point of view.”