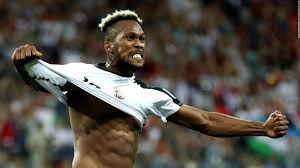 June 24 – It’s a winner-takes-all  Group B showdown in New Jersey on Monday with one huge extra incentive for Costa Rica and Haiti – avoiding big-hitters Mexico in the last eight.

Haiti,  an impoverished nation where football is still very much used as a tool for social wellbeing, are playing in their seventh Gold Cup and fifth in the last seven editions.  But they’ve yet to get past the quarter finals which they’ve reached three times and the same fate would most likely occur were they to finish as group runners-up.

Coach Marc Collat says his team, second on goal difference, will do everything to try and push Costa Rica into that position by overtaking them to win the group.

“I have a lot of respect for Costa Rica. For the last few years they’ve qualified for World Cups and have huge experience,” he said. “They are the seeded team in the group and we know we have to win to finish top at their expense.  We know very well too that if we do that we will avoid Mexico but really it’s just  a case of concentrating on this game.”

Remarkably, Los Ticos have not won the Gold Cup since 1989, the last of their three triumphs, the others coming in 1963 and 1969. All three times the tournament was known in its initial guise as the Concacaf Championship and since then they have only managed one Gold Cup final appearance, finishing as runners-up to the USA in 2002. Two years ago they were knocked out in the semi-finals.

In one sense they have done better at the World Cup, where they are small fishes in a big pool rather than the other way round, and there is no question the pressure is on Gustovo Motosos’ joint tournament hosts.

“It’s a huge opportunity and one we have to take,” he told reporters. “It makes no difference what we have achieved at the World Cup. Our goal is to go right to the end here and make history but we have to go step by step.”

Costa Rica-Haiti may be the heavyweight clash of Monday’s double header but there is incentive too for Nicaragua and Bermuda on the undercard, both out of contention but desperate to leave with a first ever victory at the tournament. Or, at worst, a point each.

The Central American country are featuring in the Gold Cup for the third time and will hope to go one better after making a swift exit in both 2009 and 2017 without picking up a single point and being outscored 15-1.

After going point-less in the first two games, Nicaraguan coach Henry Duarte made it clear he is less than happy about criticism back home, a country where funding for the game is hard to come by.

“Obviously we have not reached our incentive of getting out of the group but we have another goal – to win our first Gold Cup game,” he said.

“We hadn’t qualified since 2009 and now we’ve qualified for back to back tournaments which surely  shows we have been improving.”

Victory over Nicaragua would represent validation for the attractive football they played but coach Kyle Lightbourne is only looking at the positives.
“ People outside Bermuda probably didn’t expect us to come here and put on a decent show,”  said Lightbourne. “There’s a lot at stake for both teams. We want to put on a performance.”

Lightbourne, who credits former Southampton manager Chris Nicholl as his biggest influence, says expansion of the Gold Cup has  undoubtedly given teams like Bermuda extra incentive.

“Obviously the Nations League gives us meaningful games right away. That in itself helps us prepare, with players who want to play for the country. It’s easier now for players to make that decision.”

Skipper Dante Leverock promises his side will come back stronger in years to come as a result of the ride.
“It’s a bit disappointing not to have got something from those first two games but now we want to reward ourselves,” he said. “We’ve enjoyed this experience and this will not be the last time you will see us.”