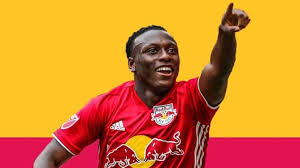 By Andrew Warshaw at the Red Bull Stadium in New Jersey

June 24 – No-one will be more motivated to make a name for himself in Monday’s Gold Cup Group B showdown than Haiti’s Derrick Etienne.

It’s exciting enough representing your country but it doesn’t get much better than doing so at the place where you play your club football.

The way he talks in his thoroughly American accent, you might assume that Etienne was born and raised in the United States.

In fact you’d be quite right.  Born in Virginia, Etienne has been with the New York Red Bulls in the MLS since joining the club’s academy in 2009 and made his professional debut in 2015. But there was never any chance he would opt to play for the United States.

His father, also called Derrick, was an accomplished Haiti international. So was his uncle and despite admitting he speaks little French, ever since he can remember Derrick Jr wanted to follow in the family’s footsteps.

Haiti fans may be outnumbered in the crowd on Monday by those of seeded Costa Rica but up to 40 of Etienne’s family and friends will be flying the Haiti flag and roaring him on against the odds-on favourites.

First called up by Haiti as a youth player, he made his senior international debut on November 9, 2016, and has not looked back. Although not always a starter, the 22-year-old winger has invariably made a difference, not least against Bermuda earlier in the tournament when he came off the bench and turned the game, inspiring his teammates to a come-from-behind victory.

“I scored my first professional goal here and this place is very close to my heart,” Etienne told reporters in the bosom of the Red Bull arena on the eve of the winner-takes-all Group B clash .

“Last time when we missed out on the Gold Cup, Nicaragua played Canada here. After that I did everything in my power to help us qualify and when I saw the group schedule, I was super excited.”

Ever since he was a child Etienne wanted to play professional football and once Haiti showed interest in selecting him as a youth player, there was only ever one way forward.

“Why would I turn my back on a country that has embraced me with open arms? My parents haven’t really been able to see me play for the national team. Just to be able to represent Haiti at my home club is something I’ll remember for ever.”

Haiti coach Marc Collat hopes Etienne will do even better than against Bermuda and against Nicaragua when he started the game.

“He’s still very young but he brings a lot to the team and I hope he’ll bring even more tomorrow. He’s very motivated.”