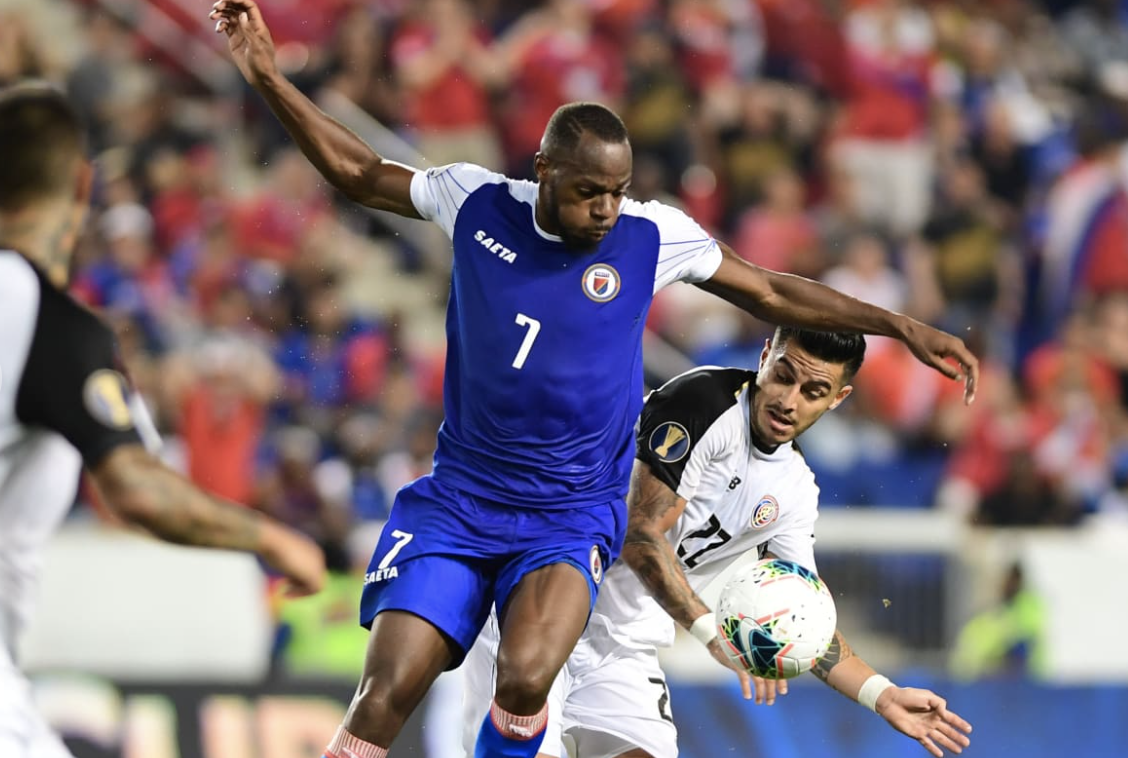 By Andrew Warshaw at the Red Bull stadium in New Jersey

June 25 – With heroes all over the pitch, underdogs Haiti stunned Costa Rica with a dramatic  second-half comeback to win Group B at the Gold Cup tonight and condemn the joint tournament hosts and group seeds to ignominious defeat and a scary-looking quarterfinal clash with mighty Mexico.

The never-say-die Haitians, who started on the back foot, took the game to their highly fancied opponents after the break and thoroughly deserved a 2-1 win that sparked the mother of all celebrations, secured a highly winnable last-eight fixture with Canada and will live long in the memory for anyone lucky enough to witness a pulsating encounter.

On a night of firsts at the Red Bull Arena after Bermuda’s first ever Gold Cup win, Haiti won their group for the first time in their history, a reward for hard work, desire, spirit and lung-busting energy against a Costa Rica side who they matched physically and out-manoevred tactically, a Costa Rica side who showed their collective age in the second half and are now in serious danger of coming up short yet again in their desperate quest to win their regional competition. 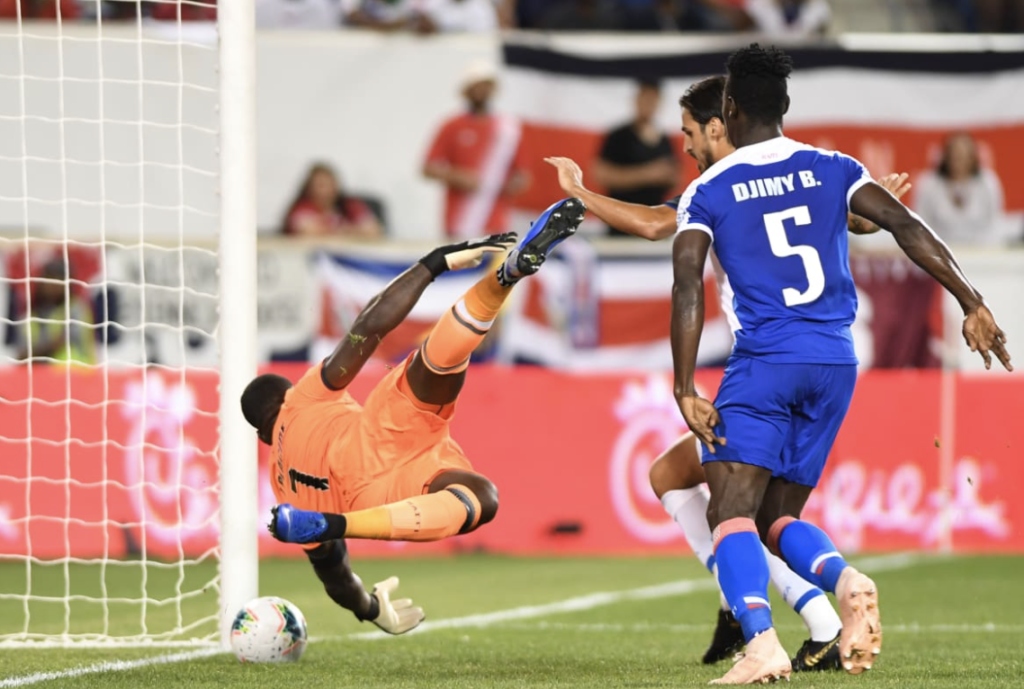 If the opening game of the group’s final double header between Bermuda and Nicaragua was an entertaining affair but lacked a certain amount of intensity, this was totally different as the respective sets of fans in a 17,500 crowd turned the stadium into a veritable cacophony of Latin noise and a colourful scene of red, white and blue.

The Costa Rica fans, most of them from the New York area, had the majority of support as they belted out ‘Ticos, Ticos’ but Haiti supporters created their own buzz, the result being a cracking atmosphere worthy of the eagerly anticipated fixture, knowing that whoever finished as group runners-up would have to play big hitters Mexico.

Both teams may have qualified for the quarterfinals already but that didn’t stop them putting on a high tempo end-to-end show full of passion and purpose.

Seven minutes were on the clock when Costa Rica, who only needed a draw to win the group,  thought they had taken the lead, only for Bryan Ruiz’s effort to be ruled offside. It didn’t take long, however, for pandemonium to break out amongst the Costa Rican ranks. A routine cross was headed back across goal and luckless Haitian defender Djimny-Bend Alexi got the final touch off his chest to send the ball beyond his own keeper who couldn’t keep it out despite a scrambling attempt.

It was just the start the joint hosts needed in their attempt to go deep into the tournament and claim the title for the first time in its current guise. They so nearly doubled their lead when Allan Cruz saw his chip over Haitian keeper Jhony Placide spectacularly cleared off the line by  Andrew John Baptiste.

A goal then might have sucked the life out of Haiti but as halftime approached, so the game started to edge their way as Herve Bastille stung the hands of goalkeeper Leonel Moreira, then had a good shout for a penalty turned down.

Costa Rica may have had over 70% of first-half possession but they never looked comfortable against the counter-attack and made a tactical defensive-minded blunder as they switched to three central defenders in an attempt to hold on to their slender lead.

All it did was encourage Haiti to come forward and on 56 minutes they levelled things up with a coolly taken penalty from Duckens Nazon after Francisco Calvo had needlessly clattered into the St Mirren forward.

Suddenly Haiti had their tails up and as Costa Rica backed off, so they looked increasingly vulnerable as the likes of veteran Ruiz, so influential early on, began to tire. 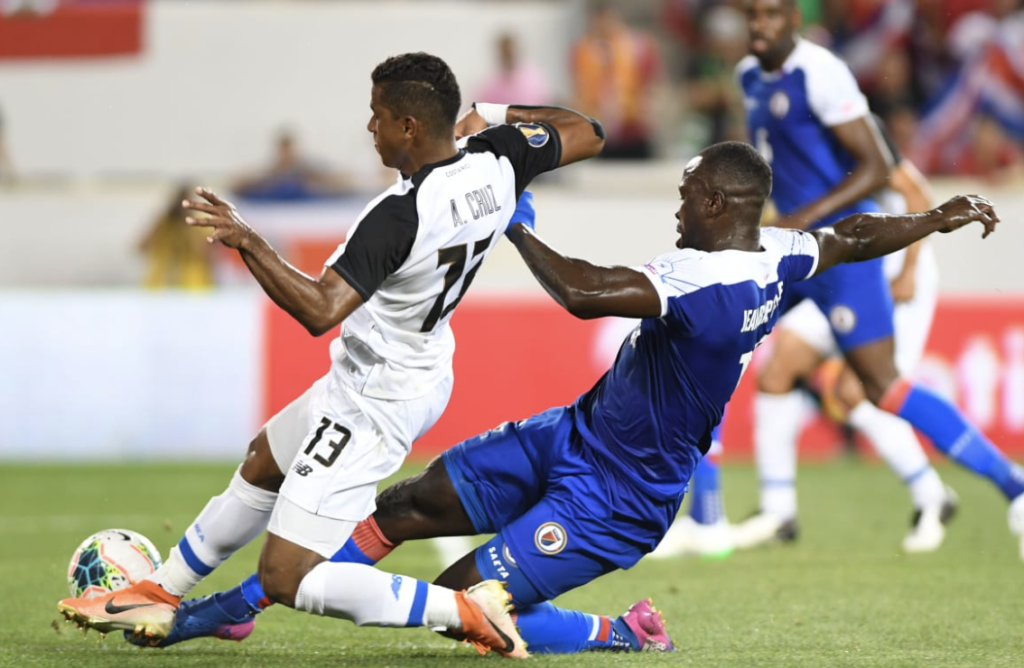 Nuzon, whose power scared the Costa Ricans defenders all night, almost added his second when he took advantage of slack marking to unleash a right-foot shot that Moreira, showing great agility, managed to push on to the post.

Now there was only one team in it and if anyone deserved to score the winner after giving away the opening goal, it was the tireless Alexis. With 10 minutes left, the Haitian defender charged down the right, ran on Derrick Etienne’s accurate cross and blasted the ball home to complete a glorious emotion-packed night for his team and country.

And, of course, for Etienne who didn’t have the greatest of games but will never forget Haiti’s greatest ever individual Gold Cup scalp at the stadium where he plays his club football for New York Red Bulls – watched by friends and family alike.