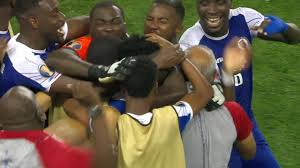 June 26 – Haiti’s proud footballers have revealed the secret behind their remarkable come-from-behind 2-1 upset of Costa Rica on Monday.

Outplayed in the first half and facing their first defeat in the tournament, the players held an impromptu three-minute no-holds-barred bonding session at halftime to gee each other up  about playing to their potential and doing themselves justice.

“We talked together as players, not with the coach,” said Djimny-Bend Alexis, the Haitian defender who inadvertently handed Costa Rica their early goal by chesting the ball into his own net but made amends by scoring Haiti’s winner late on.

“We held a meeting to give each other a boost. The fact they were leading at halftime was not because they were playing better than us, we were just playing poorly. We just told each other to play as we knew we could.”

Just as against Bermuda, Haiti found their best form once they were behind and have established themselves as the comeback kings of the tournament.
“We always stay focussed even when we are down,” said Alexis. “We have a good professional approach.”

No-one sums that up more than forward Duckens Nuzon, who plays his club football in Scotland with St Mirren and posed problems all night for Costa Rica. “He’s indispendable,” said Alexis. “He’s the leader on the field and in the dressing room.”

Haiti’s quarterfinal with Canada is hard to call but they have that all-important ingredient, momentum.

“We’ve made a statement here and we want to carry on,” said winger Derrick Etienne who plays his club football with Red Bull, a home from home. “At halftime against Costa Rica we had a talk with ourselves and were disappointed with how the first half went. Everyone was on the same page in the second half. We’ll now watch videos of Canada and make sure we know what their strengths are.”