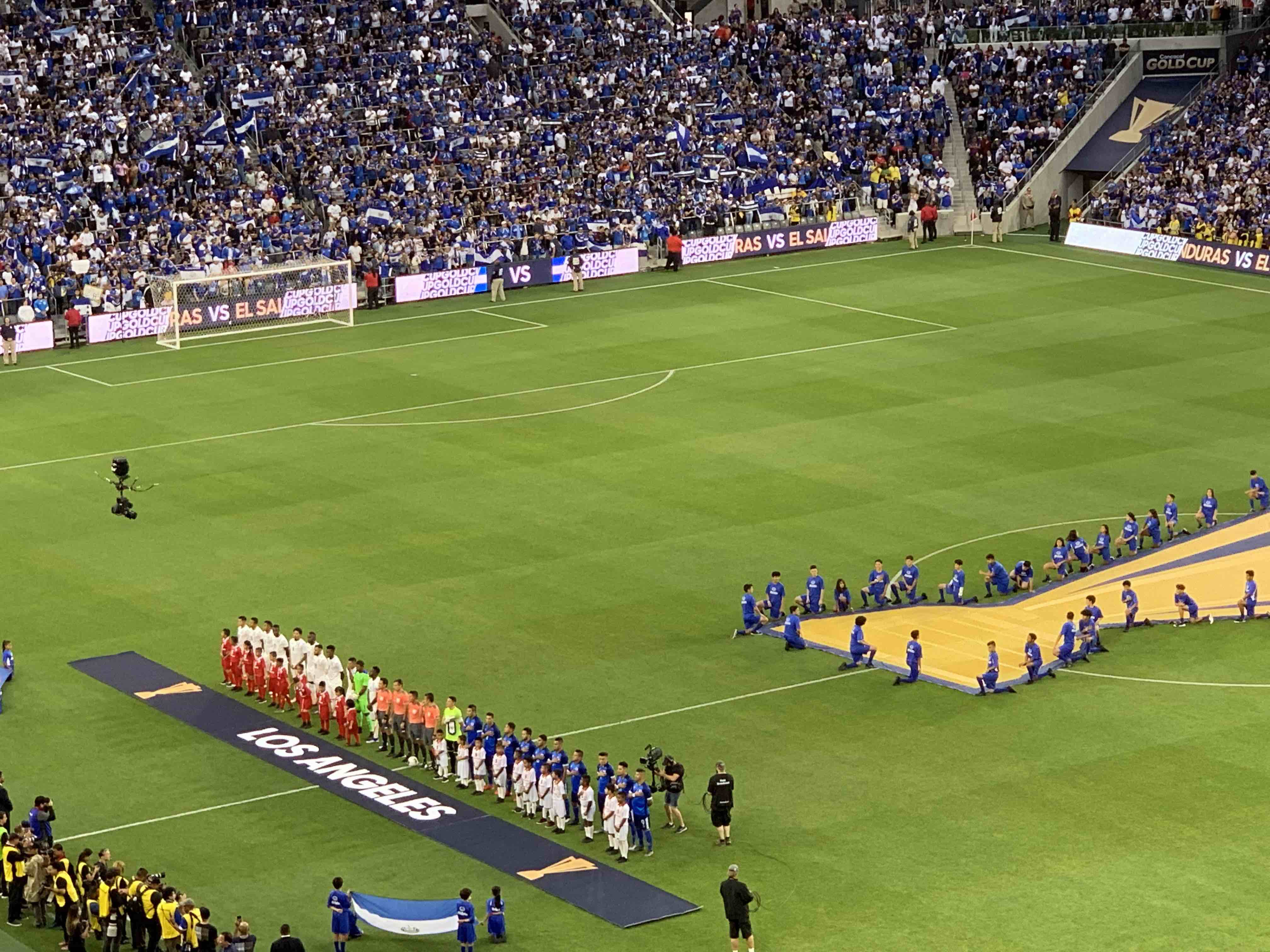 June 25 – Road signs on the way to the stadium flashed Sold Out. El Salvador vs Honduras was the hottest ticket in Los Angeles Tuesday night and what an evening of passion and excitement it was for those that were going.

As the predominantly El Salvadorian fans began their flood in to the 22,000 capacity stadium from the party they were having around gound – surely one of the most stylised and fashionable in world football – they were treated to the high drama of a stoppage time equaliser by Curacao against Jamaica.

A Jamaican win would have guaranteed El Salvador’s qualification. Suddenly El Salvdor had a game on. And their fans – making up probably 80% of the crowd – were ready for the task.

The Salvadorians now needed a point to secure qualification from the group. Honduras needed three points to salvage self respect and the confidence that they were still one of Central America’s football powers.

The teams entered the arena to a cacophony of noise. The El Salvadorian national anthem was belted out so loudly it could probably have been heard in their San Salvador capital. A huge banner was unveiled that read ‘Seeing you here doesn’t make us feel so far away’. Passion could not have been higher. 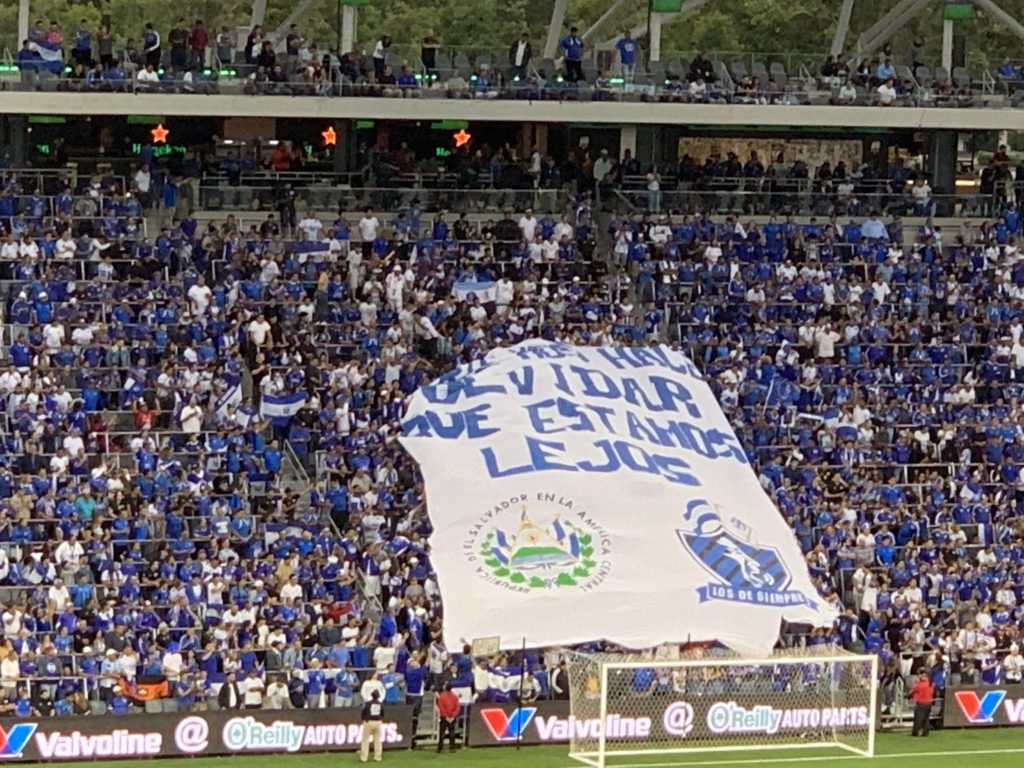 The referee signalled the battle to begin and so began an emotional rollercoaster.

On two minutes a beach ball entered the play. The beach ball was politely returned to the crowd and the hostilities resumed. It was a surreal interruption worthy of the artistic creation of Tinseltown at its best. The party may have been on but not everyone would go home happy.

The early exchanges saw the physicality of the Hondurans bully the more lithe Salvadorean movement. El Salvador were rewarded on two minutes with a free kick, but Marvin Monteroza blasted over.

With Honduras muscling forward, a scuffle in the El Salvador box saw the players square up to each other. The El Salavador fans raised the noise a notch, the beach ball incident was already forgotten.

On 10 minutes Honduras’ Michaell Chirinos beat two players on the edge of the box, drove towards goal but shot over, he should have done better.

It was end to end stuff – mano-a-mano.

El Salvador talisman Nelson Bonilla looked to be through but delayed his shot – the ball was bundled out for a corner. On 30 minutes, El Salvador keeper Henry Hernandez brilliantly tipped over the bar from a Felix Crisanto shot. On 32 minutes an overhead shot from Rubilio Castillo flew over the El Salvador bar.

With the half closing El Salvador, building in the Honduras final third, worked the ball to Carlos Portillo inside the box on the left. He fired over the corner of the goal.

Half time the score was 0-0, but forget that for 15 minutes. The party in the stands was full on. Central American music belted out the stadium sound system, people danced, flags waved, shared community was everywhere.

Back to business. The second half began where the first left off. On 51 minutes a free header in the box for Monterroza landed tamely in Luis Lopez’s arms. On 55 minutes a Honduran free kick 30m out was blasted over the top by Felix Crisanto

Then on 58 minutes disaster struck for El Salvador. A ball across the box to Jorge Alvarez saw him curl the ball beautifully into the top right hand corner of Henry Hernandez’s goal. Heartbreak for El Salvador who were now heading out the tournaments on goals scored – level on points, Curacao had scored a goal more than them. 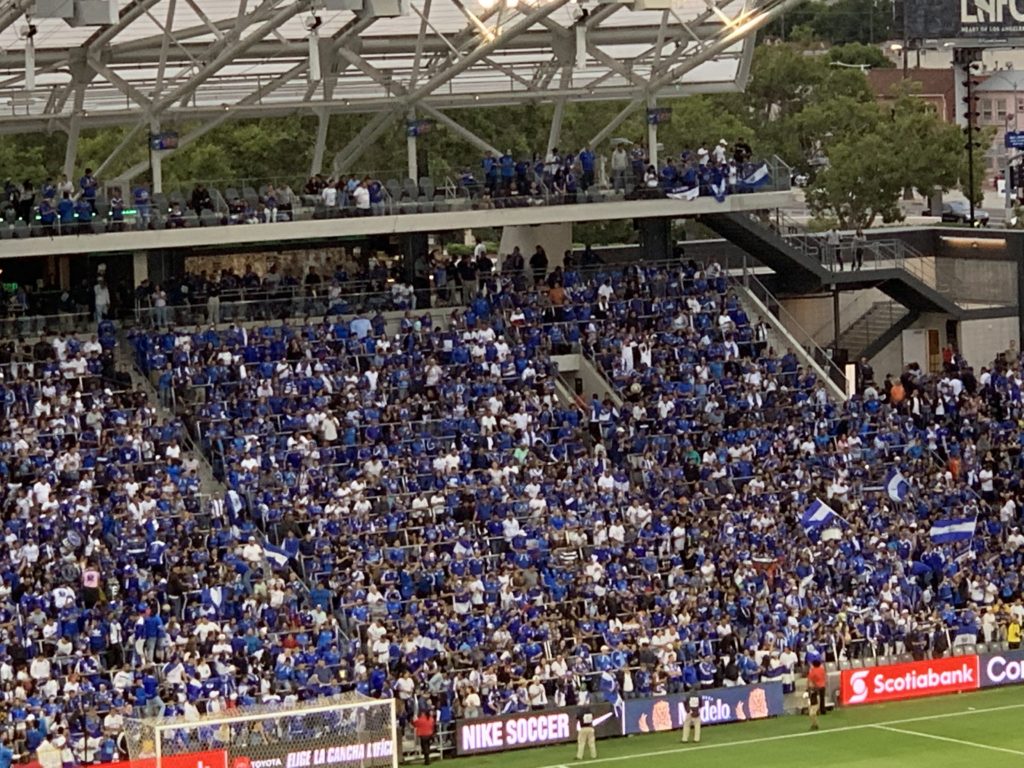 On 65 minutes Honduras were two up. Castillo, free on the right hand side of goal hammered in with his left foot. At this stage an El Salvador goal would have put them through and Curacao out.

El Salvador began to build pressure but the next goal, Honduras’ third, broke El Salvador hearts. A ball over the top to Byran Acosta saw him wriggle free of his marker to slide the ball in.

On 89 minutes Honduras cruelly made it four and confirmed Curacao’s progression to the knock out rounds. With El Salvador pressing – their lives depended on it –  Honduras countered working the ball across goal for Darwin Ceren to tap in.

It was a brutal end to El Salvador’s noble challenge and for their superb fans.