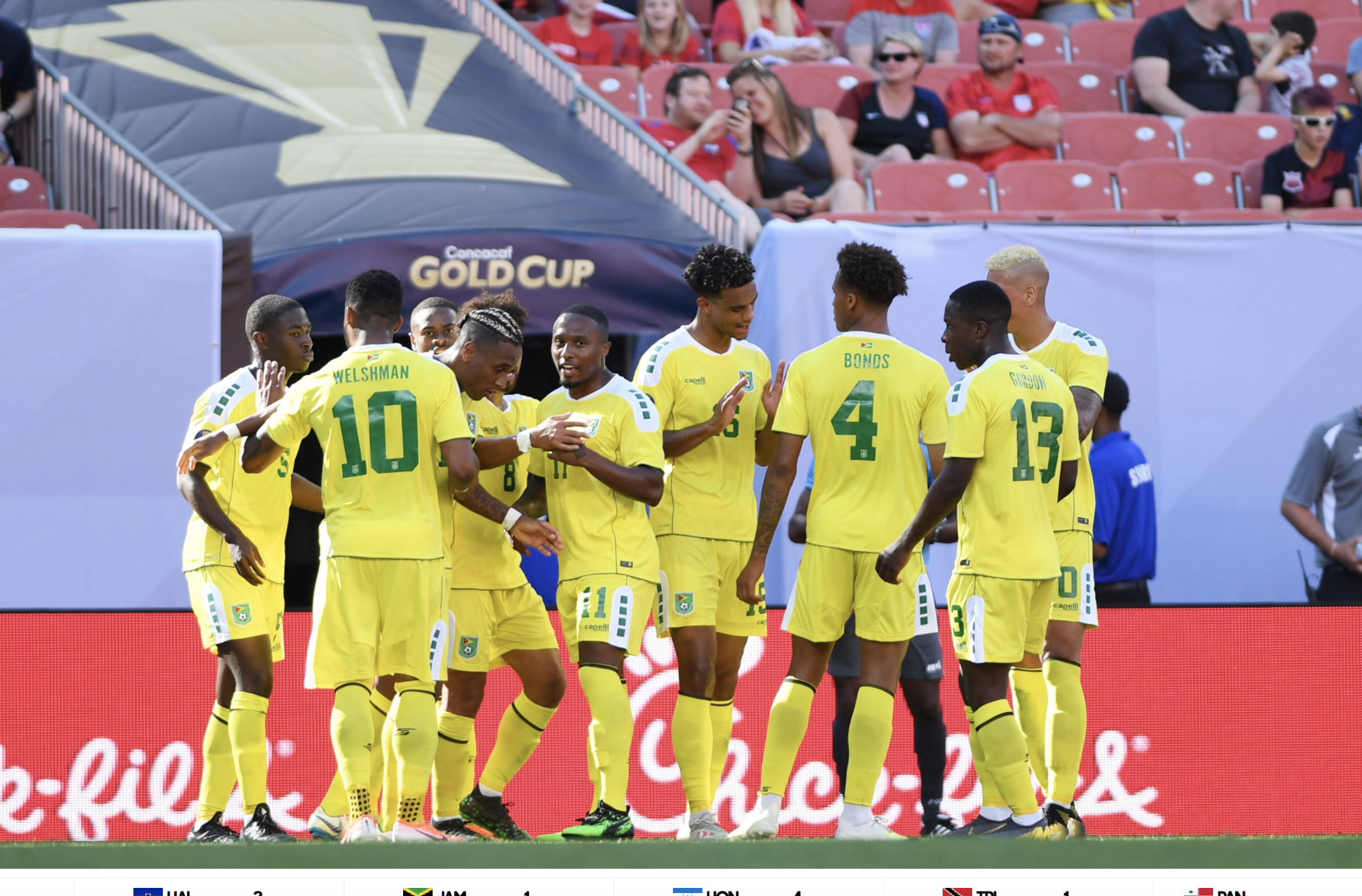 By Andrew Warshaw at Children’s Mercy Park in Kansas  City

June 26 – Guyana were 10 minutes away from departing their first ever Gold Cup with a priceless three-points tonight, only to concede an equaliser to Trinidad and Tobago in a 1-1 draw that sent  the Caribbean rivals home winless.

On paper it was a dead rubber in the American Midwest but don’t think for one moment that they were only playing for pride as they warmed up the crowd for the showdown later between the USA and Panama.

Group D hasn’t been kind to either of the minnows as they’ve had to take on two of the tournament’s powerhouses who’ve already advanced to the quarterfinals.

Going into the fixture, the teams had been outscored by a combined margin of 16-2 and were anxious to return to their respective islands with a win to show for their efforts.

Having lost their first two games, both rotated for their final outing but those in the sparse crowd (most were enjoying classic American car park barbecues in the 30-degree early-evening heat in anticipation for the sold-out main course later in the evening) were surprised to see Alvin Jones left on the bench for Trinidad, having scored the goal that knocked the USA out of World Cup contention for Russia.

For Trinidad, thrashed 4-0 and 6-0 respectively in their first two outings, even a goal would represent progress of a kind but in the first half it was the same old story as they fluffed a number of decent chances.

‘The Soca Warriors’ hadn’t scored a goal since defeating the United Arab Emirates in a friendly (2-0) back in September 2018. Since then they’d posted an 0-7 record but held a 10-1-4 advantage over their opponents.

It was evident early only that while Guyana were more skilful on the ball, Trinidad had a physical advantage. Michael Johnson’s Guyana started brighter but made nothing of a freekick in a dangerous position following a lovely interchange that was ended by a clumsy Trinidad challenge.

But as the half wore on, it was Trinidad who moved into the ascendancy with five shots on target. On the half-hour, Levi Garcia fed the ball out to Jomal Williams but his curling shot was expertly saved by backup keeper Quillan Roberts.

Roberts got down well to save again, this time when Garcia hit a goalbound effort through a ruck of players and in Trinidad’s next move, Leston Paul was thwarted by a perfectly timed tackle from Eliott Bonds who plays his club football with Dagenham and Redbridge in England’s non-league.

For Trinidad coach Dennis Lawrence, who bemoaned his country’s lack of penetration on the eve of the game,  it must have seemed like deju vu after seeing his side miss a string of opportunities.

Guyana’s response was to make two halftime substitutions sending on Brandon Beresford and Reading’s Callum Harriott but as the stadium started filling up with trademark chants of ‘USA, USA’ so Trinidad continued to make the running in the so-called Caribbean derby amid some choice language easily picked up in the press box.

Just when you thought Trinidad might at last break through, so they paid for their profligacy on 54 minutes. Neil Danns, who scored both his side’s goals from the penalty spot in the 4-2 defeat to Panama, cut in from the left and unleashed an unstoppable powerdriver into the top corner.

Rocked back on their heels, Trinidad had it all to do even to gain their first point of the tournament but Danns almost repeated the act, this time bursting in-field from the right and firing inches over.

The first goal seemed likely to prove crucial but on 80 minutes, Trinidad at last got on the scoresheet as Kevin Molino beat the offside trap, kept his balance and expertly tucked away a neat finish to secure a point.

Trinidad even had a chance to win it in the dying moments but Aubrey David couldn’t convert following a fumble by Roberts, leaving his team bottom of the group on goal difference.