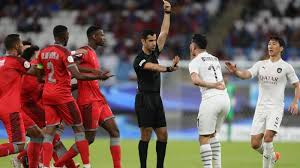 July 3 – One of the features of the 2019 Gold Cup has the work that Concacaf’s refereeing department has been doing with its officials. Headquartering them in Coppell, Dallas, the officials have represented a diverse group in terms of nationality but fast-developing group in terms of learning and experience.

Included in the refereeing contingent were a team from the Asian Football Confederation, Qatari referee Abdulrahman Al-Jassim and his two assistants Taleb Al-Marri and Saoud Al-Maqaleh. Their performances saw them take charge of the first of the Gold Cup semi-finals between Mexico and Haiti in the State Farm Stadium in Phoenix.

It was their third game at the Gold Cup having officiated Cuba vs Martinique in Denver and Panama vs USA in Kansas City. It is the third time in Gold Cup tournaments that a non-Concacaf refereeing crew has officiated in a semi-final.

The basing of the officials in Dallas has been at the heart of a Concacaf initiative to improve refereeing standards. Dallas has been a training camp as well as a rest and performance review centre. To get to the required level even the instructors have been brought in from other confederations to supplement the local leaders. Subkhiddin Mohd Salleh, a referee instructor with the AFC from Malaysia, is another non-Concacaf member of the team leading the training sessions.

The day before each match, crews head to DFW Airport to travel to their sites. They come back to Dallas after their matches for more training and recovery and a blunt assessment of their performances and instruction on what could be done differently the next time around.

The training comprises a series of drills designed to help refs spot the smallest of details while managing the movement of 22 players on the field. In one, referees run in a pattern and then are flashed a color by a trainer. “Blue!” they yell when they spot a blue object. Then they complete the pattern. Assistant referees work on their acceleration to get down the line.

“The drills our instructors do are incredibly important because they’re always looking to have us do exercises based in the reality of what happens on the field of play,” said Juan Gabriel Calderon, a young Costa Rican referee. “In training they show us just one colour, one second. Maybe that’s the one second we have in the game, like the colour of that cone, to analyse if something is or isn’t a foul.”

In an era during which every call is being looked at frame by frame, the Gold Cup is one of the last major tournaments taking place without the use of a Video Assistant Referee. That means the refs have to get everything just right the first time around.

The referees will be the first to admit, though, that doesn’t always happen.

When they don’t, they’ll hear about it back at referee headquarters.

Clips are shown in which the intended lesson or message may not be clear to the outsider. For referees, though, the little details are critical. Positioning, how loud the whistle is blown or even how close the ref gets to a player after calling a foul all get evaluated.

There are two matches every night during the Gold Cup group stage. That means two crews — comprised of a ref, two assistants and a fourth official – to analyse daily. Each game is assigned to an instructor who then brings video clips of big moments to the team of referee instructors.

Together, they watch key moments of each match to determine which clips will be included during that afternoon’s debriefing session when all referees gather. After lunch, the referees file in for the debriefing from the previous night’s two matches. There are officials from 10 nations located in Dallas.

“It takes a village to raise a child, and the atmosphere we provide is this village, this family,” said Concacaf director of refereeing Peter Predergast. “It’s a family that is dependent on trust and an open policy. The door is always open. We don’t ever close the door. We’re always available. It creates this environment of trust.”

It’s a learning moment that would’ve been tougher before the refs started congregating in Dallas. The refs were here for the previous Gold Cup as well, but prior to that traveled in different groups. Now they all can look each other in the eye to offer feedback, a joke or a word of encouragement.

“By having a referee headquarters here in Dallas, what are we able to do? We’re able to, number one provide streamlined and uniform instruction to all of our referees. I’m not hearing something in one group, another in another group That’s key,” Hall said. “Number two, which most people don’t realize is the importance of a family environment. Because the profession of a referee is one that has real ups and some real downs, right?

The night ends with the officials watching that night’s contests either communally in the same room used for the tactical session or in other parts of the host hotel. They’re rooting for their team, the referees. But they’re also looking at the behavior of each team and watching certain players in case they’re called upon to oversee a contest involving one of the squads in the future.

“I think it’s important to highlight that the CONCACAF referee prepares the same way as the players.” veteran official John Pitti said. “A lot of times, the people in the stands think the ref is waiting to make a call or give a message and that he has to go to just the game, that there’s not preparation.”

“Us referees are also human beings. We’ve got all types of emotions too. We feel. We prepare really hard,” Calderon said. “When a situation happens and we make the right decision, we also enjoy that. And unfortunately, when you commit an error, you also suffer.

“(I hope people) don’t forget that the referee is a human being, just like those who are playing soccer and the fans who are enjoying the game. We’re all playing a different role in this huge passion.”