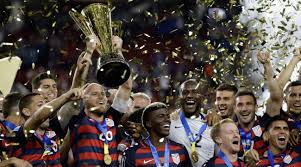 July 3 – The United States and Jamaica will battle for a spot in the 2019 Concacaf Gold Cup Final at the Nissan Stadium in Nashville tonight.

Mexico await the winners after their 1-0 victory over Haiti.

Darren Mattocks for Jamaica and Michael Bradley for the US both scored in the Atlanta semi-final and both are in their country’s squads in 2019. Bradley captaining the US, Mattocks already a Jamaican hero having scored the penalty in the 1-0 quarter final win against Panama that put them through to Nashville.

Jamaica can be a conundrum with not even their management being sure what they are going to get out of this mercurial group.

They opened their campaign on home soil with a 3-2 win over Honduras, the top ranked team in their group. It was a night of passion in Kingston with a scoreline that didn’t reflect the Jamaican supremacy.

In their next game they drew 0-0 with El Salvador in an insipid draw that has been the only 0-0 of the tournament. It was enough to give them a point that pretty much guaranteed their qualification.

Their final game against Curacao saw them waste chance after chance before taking a 1-0 lead. On 90 minutes Curacao equalised. It was a lapse of concentration that could point to their Achilles heal and frustrated coach Theodore Whitmore.

A physically powerful and dynamic team going forward, Jamaica will create problems for a US defence that four games into the tournament has still to concede a goal. Shamar Nicholson and Dever Orgill have lead the Jamaican line aggressively and it looks only a matter of time before they score more consistently.

Bayer Leverkusen’s Leon Bailey is the quality forward in the team but the Jamaicans are still to find him consistently with the ball. When they do their attack at pace will be potentially devastating.

Without doubt the creative livewire in the US line-up is Chelsea’s £50 million signing Christian Pulisic. As the tournament has progressed so has his standing with him being in or around most of the threatening moves the US have had going forward.

Leading the line the US have yet to be convincing with Gyasi Zardes not always looking the part and Jozy Altidore still coming back from injury though scoring the winner against Panama. Whoever coach Gregg Berhalter goes with they will need to be prepared for a physical challenge from the Jamaican defence.

Having started with a 4-0 win against Guyana, the US then put four past Trinidad and Tobago to ensure qualification. Their next match was a dead rubber 1-0 win over Panama that saw coach Berhalter change his entire line-up.

In the quarter finals they met Gold Cup giantkillers Curacao and despatched them with another efficient 1-0 win. Berhalter is rebuilding the US team after the disaster of failing to qualify for the Russia 2018 World Cup, and with 2022 qualification in mind an eye on the home 2026 World Cup.

It could be argued that they have yet to be seriously challenged and the fact that no-one has scored against them suggests that might be the case. Jamaica will provide a sterner challenge and there is plenty of history between the teams. They have played six times in the Gold Cup with Jamaica winning only once – the 2015 semi-final.

The bookmakers favourite is the US, but the Jamaicans have the talent and athleticism to pull off a victory, which might not be so big a surprise.