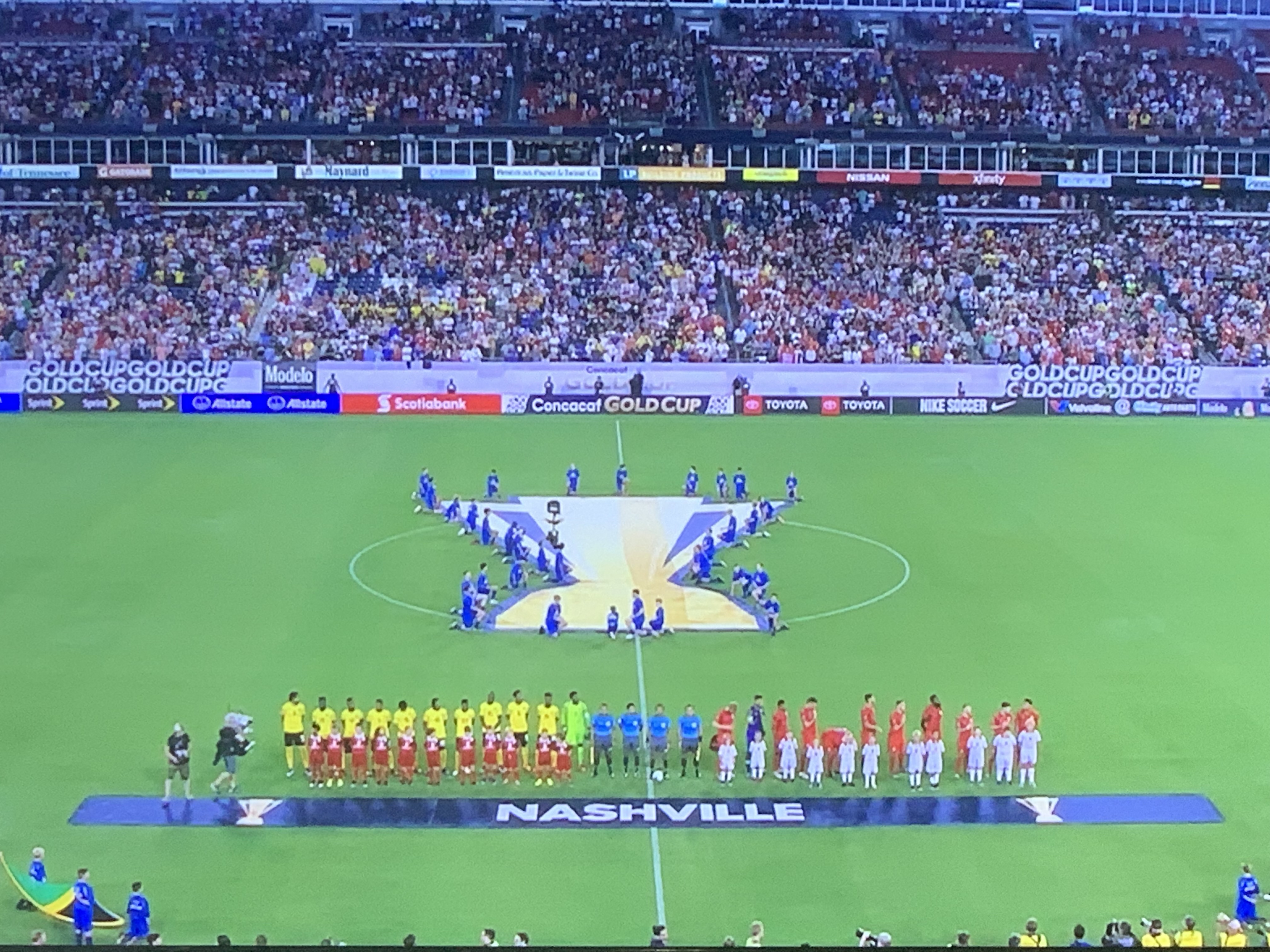 July 4 – The US beat Jamaica 3-1 in the second semi-final of the Gold Cup in the Nissan Stadium in Nashville to set up a final with Mexico in Chicago this Sunday,

Christian Pulisic was again the creative catalyst for a US victory as he scored two goals in a match that was delayed by 88 minutes dues to a lightening warning in the area.

It was a timely weather intervention for the Jamaicans who, apart from an early Darren Mattocks lunge at a ball across the US box, faced a barrage of attacks with the Americans cutting through the Jamaican lines with almost no resistance

Arriola was a persistent threat on the left, tormenting Jamaica’s right hand side with his trademark ball carries to the byline.

The US were a threat on the right flank as well. On six minutes Cannon hammered the ball into the side netting. Jamaica’s defence was struggling to hold any form of sensible shape with its midfield seemingly unsure if it should be defending high or deep and subsequently being bypassed altogether by a rampant US.

On 9 minutes the US had their goal. A long ball from Michael Bradley found Cannon on the right who pulled the ball across for Jozy Altdore to guide into the path of an incoming Weston McKennie who had the simplest of shots to score. It was all too easy and the US weren’t easing off.

On 11 minutes a Christian Pulisic free kick (at least the Jamaicans had started to tackle) just outside the box was palmed away at his left post by Andre Blake in Jamaica’s goal. Two minutes later another Jamaican foul on the left hand side of the box saw Blake in action again to scramble away Pulisic’s cross. The US could easily have been three up.

Then suddenly relief for the Jamaicans. A severe weather warning due to lightening forced the players from the pitch. It could not have come soon enough for the shambolic Reggae Boyz.

When the teams returned 88 minutes later the Jamaicans had regourped and almost equalised from a 25m shot from Junior Flemming that forced a save out of the increasingly authoritative Zack Steffen in the US goal.

But it was Pulisic who was to be the difference. On 52 minutes he followed up a rebound from a Jordan Morris shot to score his first and the US’s second.

Jamaica were certainly not out the game and were increasingly getting passages of possession. In the 69th minute the US conceded their first goal of the tournament in their fifth game.

On as a sub, the promising Shamar Nicholson headed home a cross from the right side from Leon Bailey.

It was never going to be enough. Pulisic put the match out of reach in the 87th minute, following up on another close range rebound after a shot from Paul Arriola.

Jamaica, losing finalists at the last two Gold Cups who lost to the US in 2017 as well, were out. All eyes turn to Chicago for the final between the best two teams in the competition.