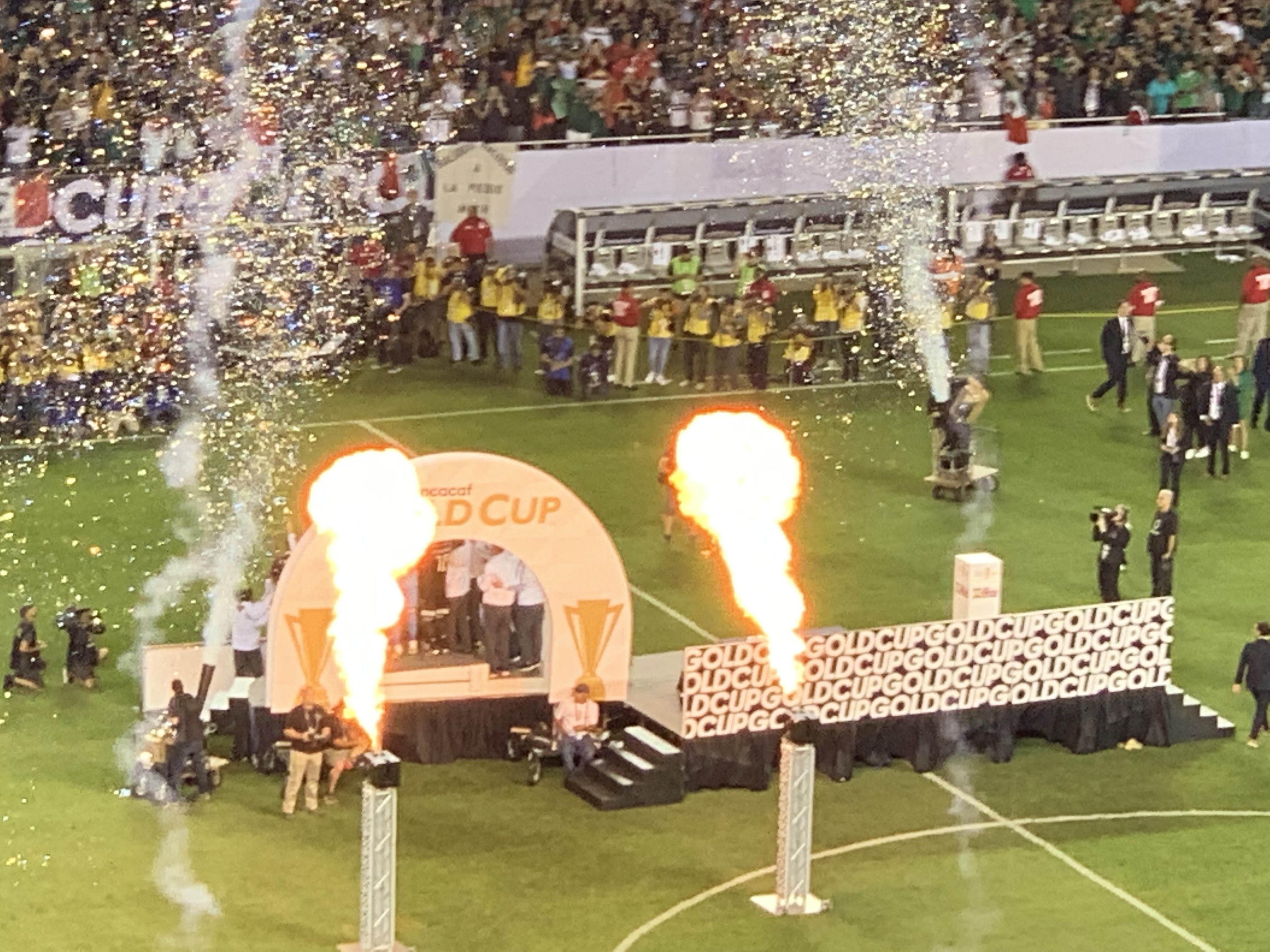 July 7 – The dream of a ‘Super Sunday’ USA World Cup and Gold Cup double was shattered by Mexico in Chicago last night.

An exciting final, full of goal opportunities for both sides was settled by a second half goal from Jonathon Dos Santos as the Mexicans increasingly imposed their authority on the game in the second half.

The US had only beaten Mexico once in the five times these two nations have met in a Gold Cup final, a championship the Mexicans have won seven time and the US six.

Although this final was played in Chicago, a neutral observer would have thought they were in Mexico such was the size of the Mexican support in the sold out crowd of 62,493. 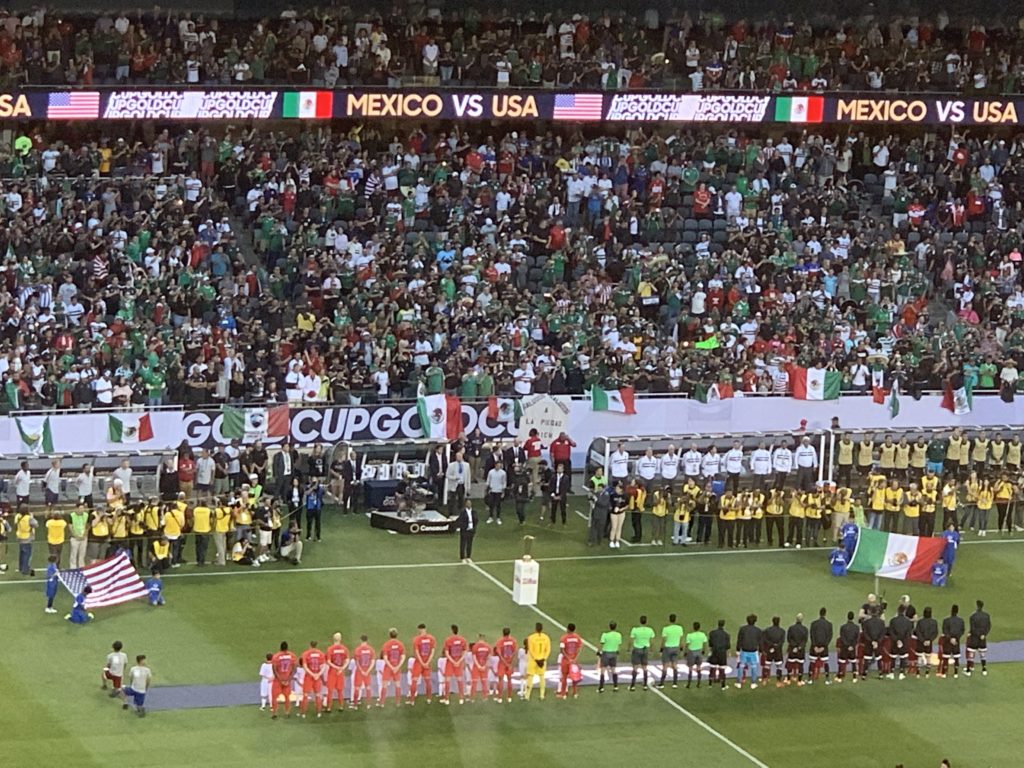 Both these teams are under new management and reinventing their playing styles. Under Gerardo Martino Mexico have expanded their passing game with a greater threat from the flanks and more balls into the box.

The US under Gregg Berhalter have built around a solid defensive formation that had only let in one goal in the tournament but which had attacked at speed and with the creative force of Christian Pulisic at its heart.

Within a minute Mexico had shown their intent with Jonathan Dos Santos driving though midfield but shooting straight into Zack Steffen’s arms. It was the opening salvo of a half that flowed from end to end with chances for both teams.

On 5 minutes Pulisic, again in the middle of most of the best US movement forward, beat his marker to get into the box only to have his shot from 8m blocked by Guillermo Ochoa. Two minutes later a ball from the left found Jozy Altidore on the right who cut inside his marker but fired wide.

Mexico switched their attack to the left and on 15 minutes Rodolfo Pizarro drove a cross into the middle that was met by and in-coming Andres Guardardo but flew over the bar.

For all their width and threatening on the flanks the Mexicans could not deliver a punishing final ball to their leading scorer Raul Jimenez who was making heavy going of the muscular and packed US defence.

With Mexico pressuring higher up the pitch as the match advanced, forcing the US to give the ball away too easily, the US looked most threatening on the counter attack.

On 30 minutes the Americans had their best chance of the half. A hesitant ball back to Mexican keeper Ochoa saw Paul Arriola steal in between the defender and Ochoa to take the ball but drag his shot just wide of the post.

Mexico responded immediately with a shot from dos Santos from just outside the box that went wide. At the other end a chipped shot from the always dangerous Pulisic was easily gathered by Ochoa.

It has honours even in a half that saw the steams matched for shots and possession.

The second half saw the first chance fall to the US on 50 minutes when a corner was met by Jordan Morris centre of goal who beat Ochoa with his header only to have it cleared off the line by Andres Guardado. It was to prove the best chane of the half for the US.

Mexico countered and on 53 minutes Pizarro was brought down 5m outside the US box. Guardado scooped his shot over the bar.

Back to their flowing best Mexico were still struggling to break through the packed US defense which was forcing their shots from further and further away from goal. Jesus Gallardo overlapping on the left pulled a cross back to Andres Guardado who fired over. A minute later he repeated the miss. The only danger was to the spectators behind the goal

On 59 minutes Pizarro take his turn at shooting high. Steffen was getting a neck ache from watching balls fly over his bar. On 63 a shot is deflected off Jimenez and into Steffen’s arms. Steffen was starting to get peppered. 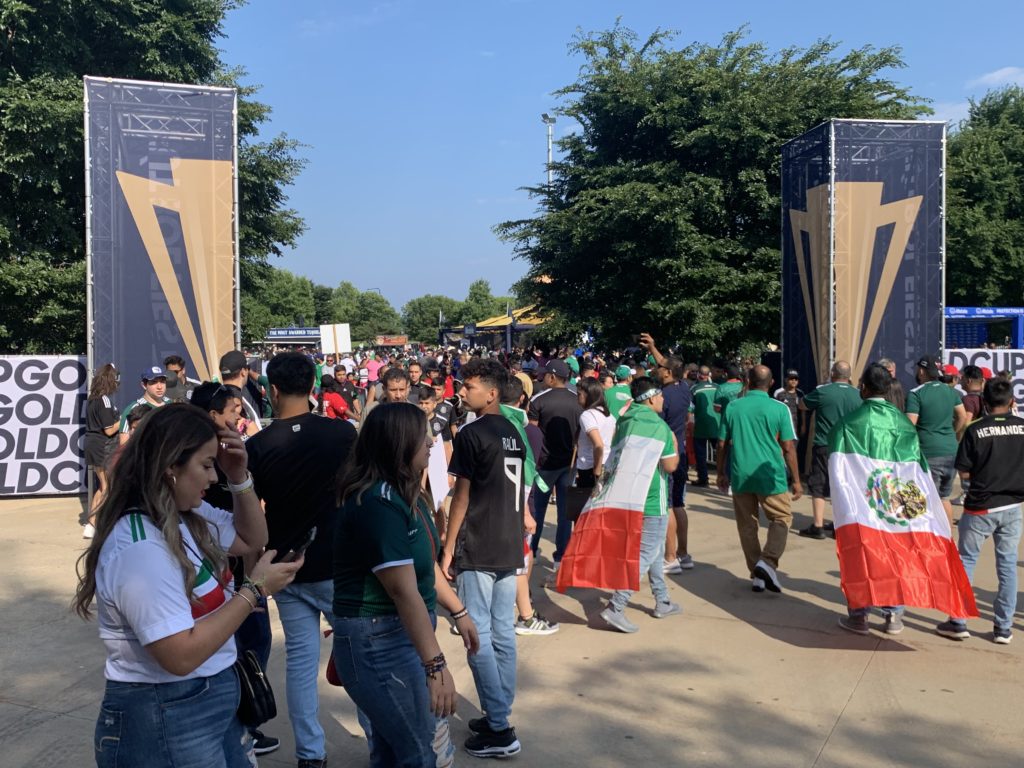 On 72 minutes Mexico had their breakthrough. Pizarro, again attacking on the right hand side of the box found Jimenez with his back to goal in the box, he waited and timed his lay off to an incoming Dos Santos who curled the ball left footed into Steffen’s top right hand corner.

A goal down, the US found a new urgency to their play. Two corners came to nothing and on 84 minutes Pulisic was pulled down outside the box only to see his freekick headed wide.

It was too little too late for a US team that has many good things to take away from this tournament.

Berhalter felt that his team “lacked some calmness and composure. We knew it was going to be a hostile crowd… I think the guys will learn a lot from this match. It was the first time a lot of the guys were playing in a game like this. We did make progress, this experience will help us going forward.”

Mexico have a trophy to take away. “We played a wonderful match and have the confidence to follow through our strategy, especially in the second half. We are on the right track. Nothing changes because we had a good result… Our goal continues to be the same. I am very happy with the way the first six months are going.”