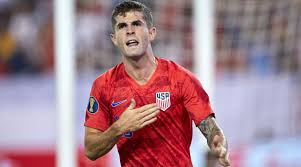 July 10 – Chelsea will be getting a humble, unselfish all-round player who will do everything for the team when €64 million US star Christian Pulisic joins up with the club following last weekend’s Gold Cup final.

That’s the glowing assessment of both US manager Gregg Berhalter and Pulisic’s international teammates.

Pulisic captained his country for the first time in the Gold Cup semi-final win over Jamaica, scoring twice in a 3-1 win and cementing his reputation as one of the finest outfield player America has ever produced.

The 20-year-old forward scored a second-half brace and Berhalter says Chelsea have an exceptional talent on their hands who will fully live up to his price tag after moving from Borussia Dortmund.

”What we see with Christian is just how dynamic he is with the ball,” said Berhalter. “He just accelerates past opponents and forces defenders into mistakes. He then opens up the game for the team. What I particularly like about Christian is his ability to take on information and act on it. He has the ability to influence the game from different positions and can unlock defences whether as a No. 10 or going wide. With the coaching he’ll get in England, he has an incredibly bright future.”

American fans took Pulisic to their hearts during the Gold Cup and teammate Cristian Roldan, who has watched him at close quarters, has no doubt he will fit in seamlessly at Stamford Bridge.

“There’s a reason why he’s going to the Premier League,” said Roldan. “He not only has quality but also humility. He’s also a fantastic guy off the pitch. He’s still a kid but the fact that he bonds with us over the slightest thing is incredible. He doesn’t act like a big star. Even at 20 he’s a role model for kids and will do what’s best for the team.”

Roldan warns Chelsea fans not to immediately expect the new Eden Hazard but believe they have a bargain who given time, could have the same impact as the Real Madrid-bound Belgian maestro.

“Hazard’s shoes are pretty big to fill but Christian is a similar player whereby he likes the ball to feet and cuts in.” said Roldan. “He will set things up tactically and he’s very smart. He’s also very quick and in time is going to be worth a lot more than 64m euros. The fans will love him.”