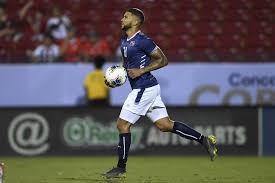 June 25 – Footballing history was made today as tiny Bermuda marked their farewell to their first ever Gold Cup  appearance with a thoroughly merited 2-0 win over Nicaragua that will be celebrated throughout the island nation, do wonders for the development of the game there and represented a key landmark for the expanded tournament.Two second-half goals within 10 minutes did for Nicaragua who were disappointing for much of the game, ended up without a single point for their troubles and for whom the long wait for a first ever Gold Cup three-point haul goes on.

With their homeland only a two-hour flight away, scores of Bermuda fans flew in to support their side, the majority of them clad in the eye-catching national colours of pink and blue. While the 25,000-capacity stadium may have been conspicuous by empty seats for what was perhaps the less prestigious opening game of the final Group B double header (Haiti vs Costa Rica was to follow), that didn’t detract from an air of expectation in the first ever Gold Cup clash between the teams.

Most observers agreed that both had deserved at least something to show from their opening two games at this tournament. Bermuda ran both Haiti and Costa Rica close while Nicaragua created several unfinished opportunities.

On paper it looked an evenly –matched affair but there was no doubting Bermuda’s superiority.

Only three minutes were on the clock when they came within a whisker of  grabbing the lead, Willie Clemons showing great skill by bringing the ball down and rifling his shot against the post with goalkeeper Henry Maradiaga beaten.

They had another great chance seven minutes later when Lejaun Simmons was given far too much space but headed Nahki Wells’ cross over the bar. Then Simmons fired over after the Nicaraguan defence gave the ball away in a dangerous position.

Nicaragua had a big problems as they struggled to impose themselves while at the same time trying to close down Bermuda’s midfield.  Jorge Betancur shot straight at Dale Eve chances but chances were at a premium for Henry Duarte’s team.

Bermuda were very much in the ascendancy, dominating play with their movement, pace and inter-change, but they kept missing chances. None more so than in a breakaway move that saw Wells, six yards out with the goal at his mercy after a glorious throughball by Zeiko Lewis, fire off a shot that rebounded off the keeper. As the ball rolled  towards the net, Josue Quijano rescued his team with a miraculous off-the-line clearance.

Marco Warren was the next to come close for the Bermudans, narrowly missing the target after some delightful trickery, then Maradiaga got down low to get a hand to a fizzing effort from  Lewis and push the ball  behind for a corner.

Having soaked up the pressure, Nicaragua had a  glimpse of  goal themselves just before the break when Manuel Rosas swung in a corner that caused panic in the Bermudan defence. It was a rare opening for Duarte’s team who had promised to attack but simply couldn’t gain a foothold in the game.

Halftime could not come soon enough for the central Americans but were Bermuda about to pay for missed chances, just as they had against Haiti?

It looked as if that might the be case when Nicaragua carved out the first two openings of the second half as they re-emerged more positively and started to move the ball quicker.

But right on the hour, Bermuda got what their attacking play deserved. The ball was transferred swiftly from defence to attack and Simmons turned inside his marker before shooting home off the keeper.

Ten minutes later and Bermuda doubled their lead to spark delirium among their noisy throng of fans. Simmons crossed from the left and Wells showed all his experience gained in the English leagues by darting between Nicaragua’s central defenders to plant a downward header beyond Maradiaga.

The job wasn’t quite done as Nicaragua twice came close to pulling a goal back, then in the dying moments had a good shout for a penalty turned down.

But apart from the occasional dangerous flurry, they were second best against a Bermudan side who return home with their first ever Gold Cup victory – just reward for lighting up the tournament with a sense of togetherness and team spirit and a personal triumph for their modest and highly approachable coach Kyle Lightbourne.